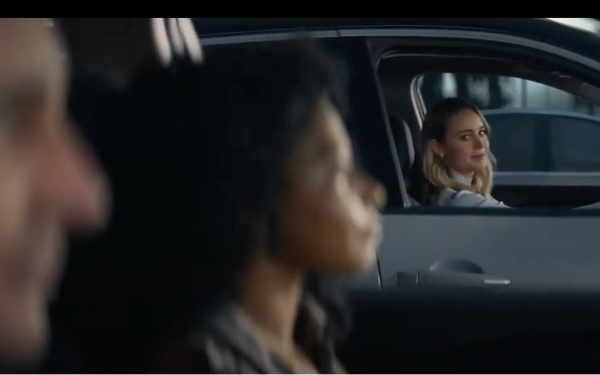 Nissan is extending its  partnership with actress Brie Larson and is launching a  2021 Rogue marketing campaign that follows a group of families putting the midsize crossover to the test across multiple terrains.

Larson first appeared in a Nissan Sentra ad campaign that broke in March.

The 360-degree “Rogue Gone Rogue” campaign for Nissan’s best-selling U.S. model in the industry’s largest segment debuts today [Nov. 9] with TV and online integrations and strategic partnerships with Amazon and Atlas Obscura. The creative from TBWA\Chiat\Day New York follows families on their varied adventures made possible by the 2021 Rogue midsize crossover.

In “What Should We Do Today,” the effort’s first TV spot, an adventure-seeking biracial family travels across many environments taking advantage of the Rogue’s auto, eco and sport drive modes as well as its snow and off-road terrain modes. Ultimately, they end up at a drive-in movie where Larson makes her cameo appearance, pulling up alongside them in her own 2021 Rogue.

“In the case of Rogue, we wanted to keep the focus on the vehicle, and we wanted to also really drive home the capabilities, the design, the safety technology, and also the fact that it’s all-new because I think this is a very important product for us,” Witherspoon tells Marketing Daily. “So she does have more of a cameo role, and it is a very surprising thing at, the end, and it is meant to be a wink that concludes it. There is more work that will be coming very soon with Brie and she’ll be in the driver’s seat and [in the] hero role.”

As part of the extended, multiyear partnership, Larson will collaborate with Nissan on a variety of on- and off-screen activities. As a Nissan brand ambassador, she will take an active role in select creative campaigns, support new model launches and participate in employee and dealer events.

Larson will also support the the automaker’s philanthropic arm, the Nissan Foundation, using her platform to bring visibility to the educational programming its grantees introduce in respective cities.

“We are looking at possible directing opportunities with her, but also just getting to know Nissan as a brand, working with us on Nissan Foundation and being a member of the team, a real true member of the Nissan family,” Witherspoon says. “So she will be in a key role of a lot of our upcoming campaigns, and they will be launch and non-launch models, but then also opportunities behind the scenes."

Lawson doesn’t have a lot of deals with brands and she’s selective about whom she works with, Witherspoon says.

“One of the things that she really wants to understand, what the brand stands for, where they are going, how they align with philanthropy, and that’s how we’ve brought up Nissan Foundation,” Witherspoon says. “Right around [the police murder of] George Floyd, she and I were having these discussions and I was saying the purpose and the mission of the foundation is really to bring education and drive community and inclusivity and that’s obviously that she’s very interested in helping to support. She was excited to see our efforts in that area.”

For more than 28 years, the Nissan Foundation has been working to foster a greater appreciation and understanding of America’s diverse cultural heritage.

“Finding a brand with mission-aligned values and an authentic connection to its workforce and customers is very important to me,” Larson says in a release. “Everything I’ve learned about Nissan supports those relationships at its core."

Nissan’s multi-tier creative campaign for the Rogue includes TV, online video, print, radio, digital and social placements around family-focused content in the run-up to Thanksgiving and beyond.

The target for the vehicle are ”secret hobbyists“ intrigued by “cool” and “unusual” things, Witherspoon says.

“To drive a deeper connection with this group we are partnering with Atlas Obscura, an online travel magazine focused on the hidden gems of the world,“ Witherspoon wrote in a blog post. “Together, we are launching a premiere (and COVID-19 safe!) drive-in series called Rogue Routesthat will be taking place in some really cool locations across the country.”