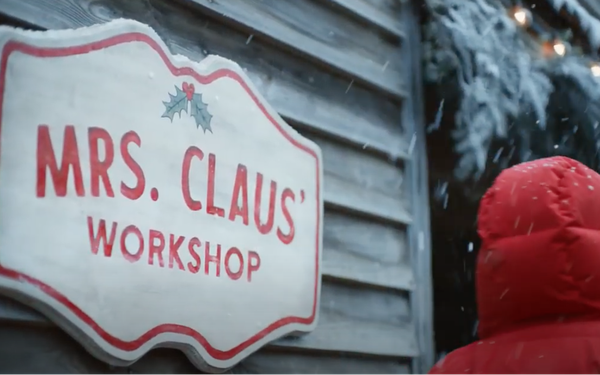 Duluth Trading Company is reinventing Mrs. Claus’ image from playing second fiddle to Santa to “the season-salvaging, wayforging woman she’s meant to be,” according to the apparel retailer.

The brand is launching an integrated campaign to promote its women’s apparel. The effort includes a children’s book.

Duluth last focused on its men's line with a straight-to-the-point campaign that launched in October.

The holiday campaign from its longtime agency of record, Planet Propaganda, titled “Forge Your Merry Way” shows Mrs. Claus in her true element—braving the cold while tending to animals, repairing the sleigh, handcrafting toys out of wood and doing whatever else the Arctic blows her way.

Of course, it’s cold in the North Pole, so she wears heavy-duty gear with red pops of color to hint at her identity.

“You’re like her,” per the voiceover. “A holiday visionary on a mission to make this year merry. Because the halls aren't going to deck themselves. Here’s to those making the magic. Forge your merry way, with Duluth.”

The campaign was shot with TV director Pam Thomas of Community Films. The work consists of 30-second and 15-second spots, which will run on cable (including HGTV, Food Network, Hallmark, TLC, and Lifetime) and digital.

Duluth Trading Co. and Planet Propaganda have also created a children’s book “Who Really Makes Christmas So Very Merry?” that reimagines Mrs. Claus as a woman who thrives on working outdoors and getting her hands dirty. It’s currently available on Duluth’s website hereand in Duluth Trading stores.

“That tenacity is what inspires us to make clothes that equip them to forge their way through whatever obstacles they face,” Shepherd says in a  release. “We’re proud to finally help Mrs. Claus get her due while letting women know that we’re here for them as they tackle what’s bound to be a tricky holiday season.”

“This was our first COVID live action shoot featuring on-camera talent, which came with some new learnings and required a flexible mindset,” Brown tells Marketing Daily.

Last-minute scheduling meant that the director needed to shoot on a single weekend day.

“Our team was observing and participating from afar,” Brown says. “The remote approach was certainly a new experience, but didn’t hamper the final project thanks to a can-do spirit from all the teams involved, although that seemingly cordial reindeer took a lot of coaxing to get him out of an ornery mood.”

The agency pitched the TV and the storybook as a one-two punch, seeing an opportunity to celebrate Mrs. Claus on camera, but also “create a charming book that would reveal her essential Yuletide role to little girls and boys for many Christmases to come.”