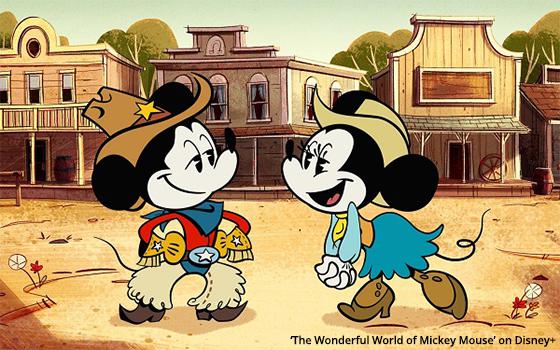 One show was available for preview and turned out to be the most loathsome show that has yet to come up for review here in 2020.

The other show was not available for preview, but it can easily be assumed that it is fun, wholesome, inoffensive and suitable for the entire family.

The latter show is “The Wonderful World of Mickey Mouse,” represented by the photo above of Mickey and Minnie Mouse. Ten new episodes -- each seven minutes in length -- start streaming on Disney+ on Wednesday (November 18).

I wish Disney+ had posted a few of these new cartoons on the web site it maintains for TV columnists to preview its shows. But for some reason, none were posted there on Monday morning.

Watching them would certainly have been a lot more fun than the miserable hour I spent late last week watching the premiere episode of the TV show referenced above in this blog’s lead paragraph.

That show is a new scripted drama called “Big Sky” premiering Tuesday night on ABC, which is also owned by Disney.

As everybody knows, Disney is such a huge company that it stands to reason that the video content it produces varies widely. But the wide net the company apparently casts when it comes to content need not include a show like this one.

Not that anybody should care -- much less take up the effort to sample this show -- but it takes place in Montana (hence the title), whose citizens this show apparently plans on insulting from start to finish in every episode.

This show’s characters live in or around a mid-sized Montana town. One of this town’s citizens is a lonely, long-distance truck driver. He is also a serial killer who preys on truck-stop prostitutes and teenage girls.

His weapon of choice: A taser with which he immobilizes his victims in order to bind them in plastic wrap, chains or ropes so that he can torture them later.

Sound entertaining? It should go without saying, but it is not. The scenes in which this killer goes about his business are, in a word, sickening. The show as a whole is entirely without merit.

By contrast, “The Wonderful World of Mickey Mouse” would appear to be a no-brainer. These are new cartoons that have apparently been lovingly produced to re-create the quality of Disney cartoons from the era in which the company first became established as the world’s leading animation studio.

The new Mickey Mouse shorts will undoubtedly bring cheer and joy to everybody who has the good fortune to watch them. It is highly doubtful that anyone who watches “Big Sky” will feel the same way.