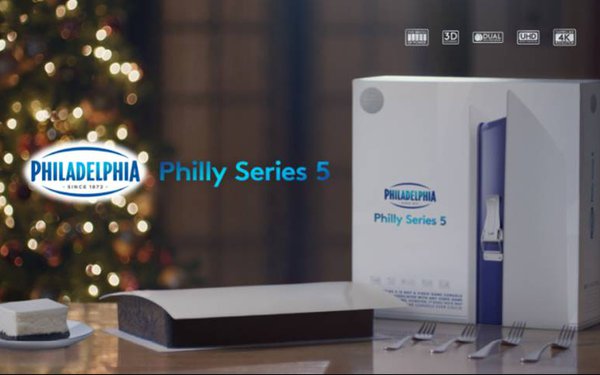 Mtn Dew and Philadelphia are taking two very disparate—and in the latter case, unusual—approaches to aligning their brands with the popular video gaming scene.

A campaign by Mtn Dew to coincide with the recent launch of "Call of Duty: Black Ops Cold War" is pretty standard: place energy-lifting beverages in the hands of virtual warriors, who guzzle them while sowing the usual multiplayer carnage and mass destruction.

Meanwhile, Philadelphia is making it seem as though it’s debuting the next hot gaming console—labeled the Series 5—but it’s actually a device that, when placed in an oven, bakes a cheesecake with “next-generation joy” technology.

The distinction between gaming and cooking doesn’t seem to matter to the two boys in this commercial from the GUT agency. As they eagerly unwrap a package, the voiceover explains “It’s the hottest gift of the holiday season.”

Cut to a couple of adults who are equally mesmerized by the Series 5—namely its “3D, cookie-crumb technology…the latest dual-egg processor” and “five bricks of power” in the form of cream cheese blocks.

All this cutting-edge tech can be had for just $4.99 at a dedicated Philadelphia website.

“Our Philly Series 5 website had over 200,000 visitors on launch day, and the cheesecake kits have sold out in minutes,” Philadelphia Brand Manager Erica Watkins tells Marketing Daily.

Asked about campaign measurement, Watkins adds, “We are reviewing social metrics such as engagement, reach and sentiment, as well as the quality of media coverage and brand equity metrics among our strategic target.”

Mtn Dew’s campaign—an extension of its partnership with “Call of Duty”—is more complicated.

To qualify for the unlock through Jan. 31, consumers enter alphanumeric codes found on participating Mtn Dew bottle caps, cans and packaging—as well as on specific bags of Doritos.

In an exclusive ecommerce deal with Target that runs through Dec. 7, "Call of Duty: Black Ops Cold War," Mtn Dew and Doritos are available for purchase in a single pack via the Shipt marketplace, with same-day delivery.