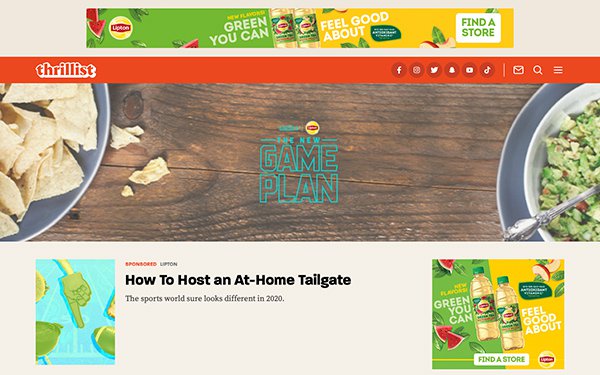 has launched a new vertical to cover the intersection of food and sports during a pandemic.

Called The New Gameplan, the hub will cover sports fans in the time of COVID-19, and how they are celebrating without physical tailgates or the ability to attend games in person.

The editorial destination is sponsored by Lipton, the official iced tea of the NFL.

The New Gameplan will publish recipes inspired by stadium food, as well as at-home tailgating tips, local and national traditions from sports communities, viewing guides and explorations of diverse fandoms across the U.S.

Specific topics include “Cocktails Perfect for Football Watching,” “Get Your Home Team Food Favorites Shipped to Your Door” and “10 Fire Pits Under $300 That Will Warm Up Any Backyard Hang."

The Detroit Bureau founder Paul Eisenstein will remain in his role as editor in chief and publisher.

TheDetroitBureau.com and Three Ships established an affiliate-marketing relationship in 2019.

“We saw a synergy that would help grow TheDetroitBureau.com even more,” stated Eisenstein.

“With everything automotive going online sooner than expected due to the pandemic — from research and sales to news and advice — we recognized the potential to be at the forefront of this trend by becoming part of the Three Ships team,” he added.

Three Ships will leverage the site’s SEO and data capturing capabilities, according to the company.

Founded in 2009 as a digital ad agency, Three Ships has expanded to building and acquiring vertically-focused media properties, such as House Method and Remedy Review.