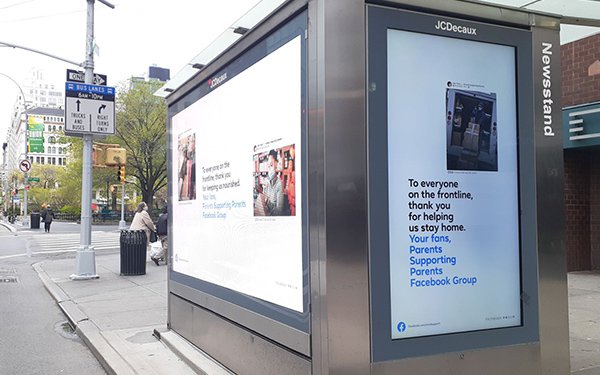 Kinetic Worldwide received the Out of Home Advertising Association of America’s (OAAA) OOH Media Plan of the Year award for its Facebook campaign encouraging users to acknowledge and thank frontline workers who are keeping communities running during the ongoing COVID pandemic.

This honor is notable because it was developed at the last minute to replace Facebook’s original out-of-home campaign. The “More Together” creative highlights how the network brings people together as groups by providing a place of belonging for every passion, belief, or any human experience. Then, when the pandemic hit, everyone saw an opportunity to alter the message to be directed to healthcare and essential workers, explains Susan Haar, Managing Director, Kinetic Worldwide.

The most significant change from the original to the revised out-of-home direction though, was how heavily the new campaign relied on digital out-of-home inventory and contextual placements to reach this new target of frontline and essential workers at the right place and at the right time, says Haar. “Facebook had historically relied on cherry-picked static inventory first and digital second, but this changed in our new recommendation.”

“In fact, DOOH became the secondary hero in this situation as it provided us the flexibility to turn the campaign on at a moment’s notice,” adds Haar. “Facebook ended up embracing programmatic out-of-home buying as part of the normalized practice for the campaigns that followed and programmatic will be part of [our] approach for the future.”

Other winners of the 21st Annual OOH Media Plan of the Year include Vistar Media, which collected the OOH Measurement Award for its campaign with Eaze. The Vistar Media campaign spanned two initiatives, which incorporated DOOH across its separate “Summer Celebration” and “End of Q3” campaigns. In both cases, Eaze used a data-driven strategy to leverage programmatic DOOH to complement the other channels in its media mix, which included printed OOH, mobile, digital and audio.