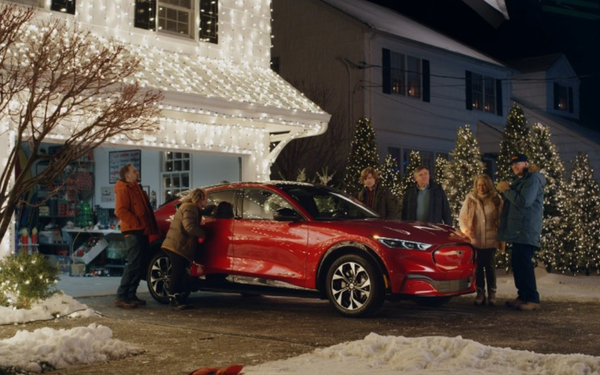 The actors appear as Clark and Ellen Griswold in an updated take on one of the 1989 holiday classic’s most iconic scenes. In the original scene, Chase's character hung so many Christmas lights that it temporarily cut power across the entire city.

In the commercial, Chase initially has another lighting fail -- until the Mustang Mach-E saves the day.

The ad aims to bring a smile, "reinforcing Ford as a brand accessible to everyone," says Matt VanDyke, director of U.S. marketing for Ford.

“We take immense pride in our human-centered approach. The technology inside the Mustang Mach-E is not only visually appealing and intuitive but is simple and easy to use,” VanDyke tells Marketing Daily.

Mustang has been a cultural icon for decades, he adds.

“With the Mustang Mach-E, we continue to leverage this cultural relevance and felt the recreation of the famous Christmas lights scene from 'National Lampoon’s Christmas Vacation' was a fun fit,” VanDyke says. “This movie continues to connect families across generations much like the Mustang brand.”

Ford teamed up with Lorne Michael’s global entertainment and media company Broadway Video, creators of "Saturday Night Live" to recreate the famous holiday lights scene, says a Ford spokesperson. The tribute aims to help drive awareness for the new electric offering, which is shipping now to customers in the U.S., the spokesperson says.

Of course, Chase uses humor to explain his involvement with the campaign.

“It’s great to be back for another Christmas with my on-screen family and its rotating assortment of kids -- and I have Ford and Mustang Mach-E to thank for paying me to do it,” Chase says in a release. “I suppose you’re expecting some sort of riff on electric cars, but I can say with 85% certainty that this thing probably won’t cause any blackouts in your neighborhood when you plug it in.”