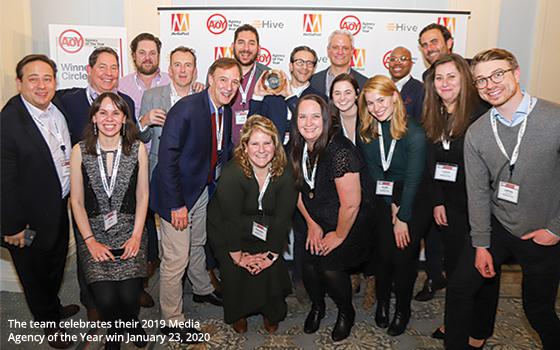 Selecting MediaPost’s agency of the year is always a rigorous process based on how well each candidate explicitly demonstrated their vision, their innovation and their industry leadership.

Selecting the same agency two years in a row is always an even higher bar, but as we have noted when we’ve done that in the past, it makes a great deal of sense that if a media shop is humming on all cylinders, it should continue doing so over time — even the span of years.

But we’ve never had a situation where agencies had to deliver on that promise during a year as chaotic as 2020, when virtually every industry norm was thrown out the window, and when so many businesses, institutions, and ways of life needed to be reinvented on-the-fly.

And while many contenders did an incredible job of demonstrating their agility and their ability to pivot to sustain both their clients’ as well as their own businesses amid so much disruption, one stood out as having a unique north star that manifested before 2020, but will likely carry them well beyond.

MediaPost is naming Mindshare its Media Agency of the Year for the second consecutive year for making empathy its guiding force. And not just for applying empathy to its own and its clients’ organizations, but for the greater world they exist in, including their media partners -- and perhaps most importantly, the consumers they ultimately try to influence through the behavior of their clients’ brands.

“First and foremost it bears repeating that everything we do is in service of provocation with purpose,” explains Adam Gerhart, who was CEO of Mindshare’s U.S. operations when we made that decision, but has since been named Global CEO of Mindshare worldwide.

Gerhart says that has been Mindshare’s mission for some time, because it is what gives it “license to continue pushing on the conventional notions in our industry” in order to innovate and lead the marketplace, whether it is agency compensation or service models, or as its performance in 2020 demonstrated, the greater world they exist in.

“Without purpose, it’s just provocation,” he says, adding that 2020 gave new impetus to the meaning of that word, requiring many advertisers and agencies to rethink not just their roles in marketing, but in society at large.

Mindshare, of course, was already on that runway, even before the pandemic, or other equally turbulent developments such as a racial justice movement that exploded alongside it.

Mindshare had already begun addressing unconscious biases in the media-buying process by creating a programmatic LGBTQ private marketplace (PMP) in 2019, which was one of the reasons it was named media agency of the year that year, but it already had a similar plan in place to tackle racial injustice and the inequity of advertising budgets missing important Black media outlets.

And to help its clients understand how the perfect storm of a pandemic, racial injustice and an economic crisis were transforming consumers, Mindshare launched a weekly “Covid Tracker” polling a nationally representative cross-section of Americans on not just the pandemic, but race, politics and other key events and indicators.

To help inform those insights, Mindshare leveraged a proprietary tool that is unique to the media agency -- its Neuro Lab, whose launch was another reason for its 2019 win. But challenged by physical social distancing, it adapted the lab’s tools from on-premise biometric metering to virtual tools such as facial-code recognition, enabling it to maintain continuity in understanding not just people’s conscious responses, or behaviors, but how they were feeling at unconscious levels.

The neuromarketing insights have been used to inform all of Mindshare’s audience planning, including new emotional segmentation methods. The neuro insights are also being applied to developing new tools that just began to take root in 2020, and are not yet fully baked, including a “Mindshare Recovery Dashboard” and a content publishing “toxicity index,” as well as an ethical approach to acquiring and using consumer data.

While some of these tools are still in early development, all are being being beta tested with real clients and will be deployed on a broader scale as they prove their concepts, but they all are at the service of Gerhart’s mantra of “provocation with purpose” and never losing sight of what that purpose ultimately is: people.

Sometimes those people are clients and sometimes they are their consumers. And during a year of unprecedented economic disruption, sometimes it’s your own organization.

By finding ways to accommodate Mindshare’s humans via cross-training, reassignment, and other vital steps, Gerhart’s team was able to keep its job losses to well under 1%, which is well below an estimated 20% for its competitive set.