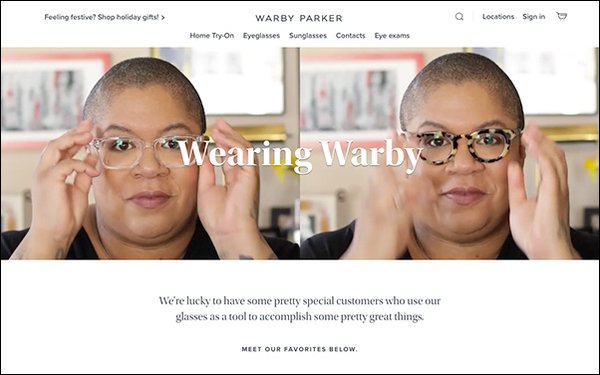 By any measure, Warby Parker has earned its status as archetypal D2C. How many “disruptors” startup business plans have somewhere in their pages “We propose to be the Warby Parker of X?”

The decade-old brand didn’t just check every classic D2C box. Their longtime brand builder and CMO for much of that time, Lori Krauss, helped outline a lot of those boxes.

School buddies felt burned by the exorbitant price of eyewear, so they decided to undercut a monopolized industry with a cheaper, more direct channel that also had a social conscience. Famously, they sent five sample “try-at-home” frames to customers to modernize the try-on experience.

And while automation removed friction at every turn, human interventions in the customer journey seemed to blend tech and touch in perfect proportion. And of course there’s that “brand values” box.

But in this case, Warby was all-in. Their “Buy a Pair, Give a Pair” charitable mission provides eyewear to the underprivileged and makes the consumer a giver in a specific, tangible way. Check, check, double check. And it is under CMO Lori Krauss’s watch that the Warby Parker brand built a culture that marketed itself.

But as the D2C cliché goes — does hip really scale?

Under Lori Krauss’s marketing stewardship, Warby Parker appears to have avoided most of the adolescent D2C missteps to growth. Unlike most startup CMOs, Krauss has been a Warby-ite for much of its decade-long life, joining in 2013 as vice president of brand management and taking the reins in 2017. She was a veteran of iconic fashion brands (Nike, Vera Wang) and came on board as the company started opening retail outlets in 2013.

In fact, Warby Parker’s marketing hat trick has been its ability to integrate this move into more than 125 traditional brick-and-mortar locations with a pioneering digital spirit.

Customers can “favorite” items online so that in-store associates access them during live visits. Likewise, in-store frames and even photos of try-ons can be saved for later online purchase. These are the kinds of customer experiences that keep word-of-mouth at the center of Krauss and Warby’s marketing strategy.

And yet Krauss does not seem shy about building brand and driving omnichannel traffic the old fashioned way. Warby has quickly become one of the biggest buyers of tv advertising among direct brands. Its sassy, rapid-fire spots are laser focused on featuring the basic value proposition while staying quirky, stylish and intimate. 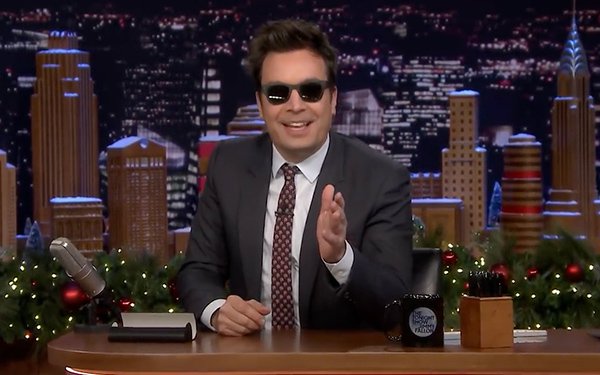 Just as Warby’s live and virtual retail experiences are seamlessly integrated, Krauss’s digital team seems to be the font from which the brand’s multichannel identity, creativity and ’tude germinate.

Its famous Instagram feed tells you all you need to know about its digital chops and whimsical voice. Everything from sharing customer try-ons and touts to send-ups of celebrity testimonials (starring Jimmy Fallon) blend with goofs on the WP name.

The “Wearing Warby” series highlights activists and creatives rocking the eyewear. And it all starts by embracing the goofiness of the name: the “Warby Barker” self-parody site (yup, glasses for pets) and compilation videos of Google search misfires for the brand (“Warner Darby Glasses?”).

Few brands new or old can claim to have a real sense of humor, especially about itself, and Flowsy Sparker is engaged in some deep branding here. 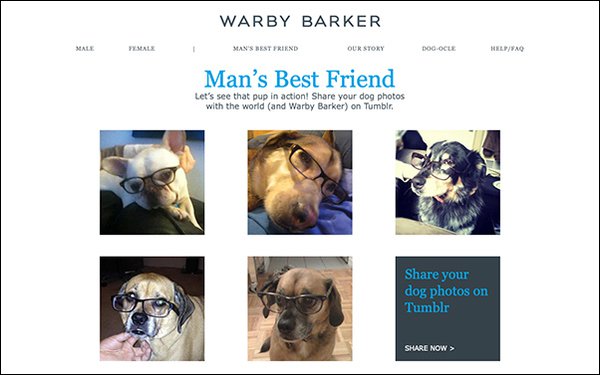 Kidding aside, the omnichannel marketing plan for Warby hinges on pioneering virtual experiences that bridge tech and touch. While most of us wondered when Apple would make good on its long-promised Augmented Reality (AR) ambitions, Warby’s AR app demonstrated how effective the big tech could be on the small things — like trying on glasses. Its virtual fitting room tool garnered record downloads and was cited by Time as one of the best inventions of 2019.

Charitable tithing is de rigueur for DTCs, and more often feels tagged on than baked in. The “Buy a Pair, Give a Pair” model is just the most visible part of a comprehensive social commitment that runs deeper and broader than any brand we have seen. Its Pupil Project distributes free glasses to schoolchildren. Its employee voter registration and racial equity goals make activism part of the corporate culture. And an annual “Warby Parker Impact Report keeps the brand accountable to itself and customers. Warby’s considerable commitment to building a business that does good is foundational to its brand, however.

If Warby Parker is the very model of seamless clicks-to-bricks retailing, then the CMO overseeing much of this is herself an example of bridging traditional marketing experience with next-stage branding. During Lori Krauss’s tenure, the company has shown how the future may belong to brands whose corporate culture is the marketing.