General Motors is launching a dramatically restyled corporate logo and brand identity as part of a campaign that aims to accelerate mass adoption of electric vehicles.

Themed “Everybody In” and created by Commonwealth//McCann, “it is a call to action meant to reflect a movement that’s inclusive and accessible,” says Deborah Wahl, GM global chief marketing officer,

The new logo, created in-house, “builds on a strong heritage while bringing a more modern and vibrant look to GM’s familiar blue square,” Wahl says. It features a lower case “gm” with the "m" meant to resemble an electrical outlet, she says.

This is only GM's third logo change in 115 years and the most "progressive" change since 1964, she says.

Wahl previewed the campaign for the media Friday morning as a lead-up to the company’s efforts at CES next week. One of next week’s events will feature GM President Mark Reuss having a conversation with Malcolm Gladwell, author of “The Tipping Point,” who is featured in the campaign. 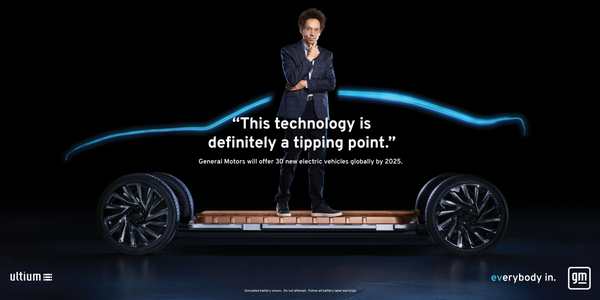 The campaign, which breaks in the U.S. Jan. 11 and will roll out globally later,  aims to excite a new generation of buyers and accelerate EV adoption, she says. It also demonstrates GM’s EV leadership, which includes the investment of $27 billion in EV and AV products through 2025, and the launches of 30 new EVs globally by the end of 2025.

Finally, it highlights the range, performance and flexibility of the Ultium battery platform, which will be capable of delivering an EV that can go up to 450 miles on a full charge.

The company is also evolving its brand identity as GM transforms itself to deliver on a vision announced three years ago that would equal a world with zero crashes, zero emissions and zero congestion, Wahl adds.

“There are moments in history when everything changes -- inflection points. We believe such a point is upon us for the mass adoption of electric vehicles,” Wahl says. “Unlike ever before, we have the solutions, capability, technology and scale to put everyone in an EV. Our new brand identity and campaign are designed to reflect this.”

The invasion at the U.S. Capitol did not affect the timing of the campaign.

"We are certainly mindful and paying attention to world events and working through that as people ourselves, but developed this campaign with optimism and inclusion as main themes and feel those are the types of messages the world needs to hear moving forward," a GM spokesperson tells Marketing Daily.