When Angry Anchorman Attacks, No Brand Is Safe 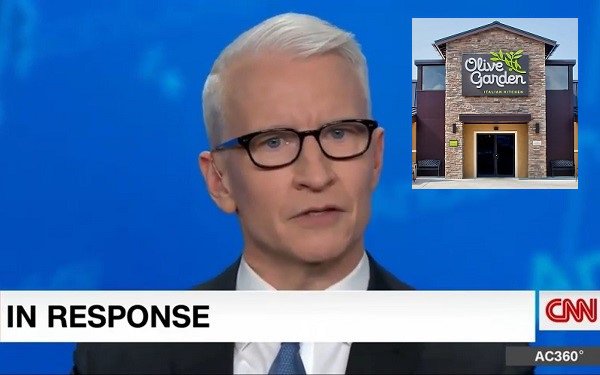 Questions like these are no doubt on the minds of executives and employees at these and other national food and lodging chains in the wake of the CNN anchorman’s sudden and unprovoked attack last week in which he associated two other nationally known brands -- Holiday Inn and Olive Garden -- with the Trump yahoos who invaded the U.S. Capitol building last Wednesday.

Inevitably -- and understandably -- CNN rival Fox News Channel jumped all over Cooper for his comments.

On their own shows last week, Fox News personalities ranging from Tucker Carlson to Sean Hannity asserted that Cooper’s comments left the impression that he was this elite, rich guy (literally a descendant of one of the most legendary family fortunes in American history, the Vanderbilts) who was looking down his nose at ordinary Americans who enjoy treating their families to dinner at Olive Garden or seek out mid-priced quality hotel rooms at chains such as Holiday Inn when they travel.

Cooper made his remarks on CNN while covering the riot and invasion of the Capitol last Wednesday afternoon as the story was unfolding. He invoked the Olive Garden and Holiday Inn brands as he attempted to describe the scene that was playing out onscreen.

“Look at them,” Cooper said, “they’re high-fiving each other for this deplorable display of completely unpatriotic, completely against law and order, completely unconstitutional behavior. It’s stunning!

On social media, fans of Olive Garden jumped to the defense of the family-friendly Italian restaurant chain, praising the food, the portions and its affordability.

Others knocked Cooper for his confusing “Garden Marriott” comment too. To them, it revealed his apparent unfamiliarity with some of the nation's best-known mid-priced hotel brands -- Hilton Garden Inn and Marriott Courtyard.

The fact that Fox News piled on afterwards came as no surprise. For the likes of Tucker Carlson and Sean Hannity, Cooper’s remarks were the equivalent of a home-run pitch that came right down the middle for them to slam out of the park.

For his part, Cooper got around to firing back at his critics from Fox News on Friday (the above picture is from his show, “AC 360,” on that day).

He accused Fox News and its talk-show hosts of downplaying last week's Capitol insurrection, and blasted them for overplaying his remarks about Olive Garden at a time when a mob had just taken over the U.S. Capitol for the first time in American history.

As for his painting of Olive Garden and Holiday Inn with a Trumpian brush, Cooper said he did not mean to offend the companies or their patrons. He admitted his words were not well-chosen.

He complained about the Fox News hosts' assertions that he was “dissing” Olive Garden and the people who eat there. “I've been kind of sad about it all day,” Cooper said about the critiques.

For the record, Cooper said he likes Olive Garden and even praised it “repeatedly” during one of his New Year's Eve shows on CNN.

In addition, he said, “over the years, I've also publicly praised orange chicken at Panda Express, turkey with stuffing at Boston Market and McDonald's Big Macs.”

These examples of Cooper's high regard for the commonplace in fast food notwithstanding, perhaps he should make a point of visiting an Olive Garden soon and live-streaming himself relishing the chain's famous breadsticks and multi-cheese pasta dishes.

If not, many in the food and lodging industry whose companies have not yet come up for either a thumbs-up or a thumbs-down from Anderson Cooper are left to wonder: Who's next? IHOP? Waffle House? Red Roof Inn? Where does it all end?