Tums Aims For End-Run Around 'The Big Game' 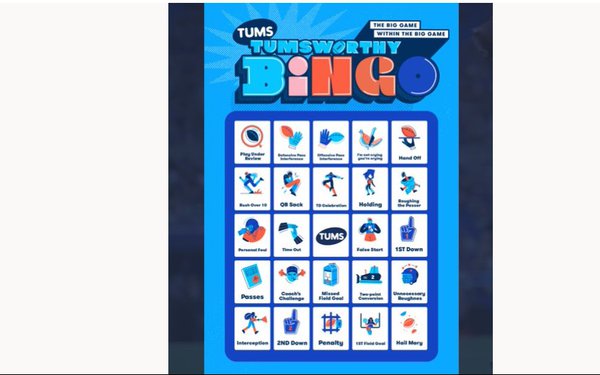 Every year, brands that can’t or won’t buy Super Bowl ads use other ways to get their messages across by using different media, or just buying local ad avails during the game. It’s their advertising end-run play.

This year, GlaxoSmithKline’s Tums will make its Super Bowl presence felt by sponsoring the #TumsBingoSweepstakes, which uses social media to get fans to play-to-win by matching game events like “pass interference,” “play under review” or “10 yard gain” on an online bingo card.

Winners will split $55,000 in prizes  -- but winning also involves using social media to comment on your good fortune (or possibly, your lack of it).

The idea itself isn’t brand new. Online, party planners can already find the football-play-based bingo game idea fleshed out. And Tums itself used online exposure last year for consumers to rate their most heartburn-inducing moments during the Super Bowl for its #Tumsworthy second-screen campaign that it says received the fourth-most mentions of any brand on Twitter on Super Bowl Sunday.

This game seems a little more involving. There’s no need to keep the game board open the whole time. The boards themselves are auto-filled. But a player is encouraged to tweet enthusiastically to other players using the #TumsBingoSweepstakes and #TumsWorthy tags. And Tums will use social media promotion to help the game along, tweeting out stressful game events that will be highlighted on the customized, downloadable bingo boards.

Consumers can start entering on Feb. 1 via TumsworthyBingo.com.

Tums worked with Grey New York and with well-known oddsmaker Kenny White to design the promotion and the game.

The company doesn’t really say it’s a Super Bowl stunt. It uses the euphemistic and legally allowable phrase “the Big Game” to substitute for that annual contest that now has Roman numerals attached to its name.

In fact, it is a big day for Tums. A company spokeswoman says the only day more likely to induce indigestion is Thanksgiving. Game day can mix stress, overeating, overdrinking and entertaining into one disagreeable package.  To purposely mix cliches, the Super Bowl is kind of like Christmas Day for the antacid business.

Virtually no one watches the Super Bowl on TV alone. By 2018, according to research by the live media production company Grabyo, nearly 80% of those watching the game--you know, the Big Game--were interacting with social media. The second screen is not second by much on Super Bowl Sunday.