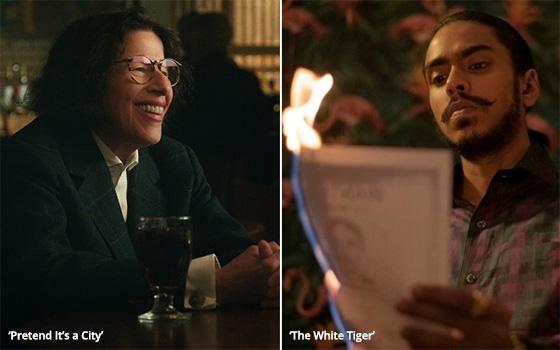 Our Netflix choices last weekend ranged widely -- from the comedic musings of Fran Lebowitz to a tragic tale about the class struggle in modern India.

About both we had heard and read good things. So, like many people today with time on our hands in the dead of winter, we watched both of them.

In the process, we were reminded -- and not for the first time -- that our tastes these days, when it comes to entertainment, run more toward comic musings than class-conflict tragedies.

How others react to either the Fran Lebowitz series now running on Netflix -- titled “Pretend It's a City” and directed by Martin Scorsese -- or the Indian movie (“The White Tiger”) is entirely up to them.

It is all a matter of personal taste and demographics -- at least in the case of “Pretend It's a City,” which premiered on Netflix on January 8.

In this seven-part series, each half-hour episode consists almost entirely of Lebowitz (above photo, left) sharing her views on a somewhat narrow variety of subjects, almost all related to life in New York City as it is lived today by a 70-year-old.

To fellow New York City residents of a certain age, her opinions are wholly relatable. In addition, the tone of voice she uses to deliver them is entirely entertaining -- at least to those of us who are more or less accustomed to people like her.

This must be why Lebowitz, who first gained fame as a prolific writer of magazine stories but has not been nearly as prolific in recent years, derives the bulk of her income today from speaking engagements. She is a great performer in that medium.

Pieces from some of these appearances are featured in “Pretend It's a City” (the title is a phrase she uses when talking about out-of-towners who clog New York City's sidewalks and in the process, impede the forward motion of city residents who are trying to get somewhere).

Other portions of “Pretend It’s a City” come from conversations between Lebowitz and Scorsese that were filmed at New York's venerable Players Club on Gramercy Park.

Apparently, Scorsese and Lebowitz have done something like this before in a documentary called “Public Speaking” what was seen on HBO in 2010.

As a long-time New York City resident, I have to wonder whether the urban musings of Fran Lebowitz can possibly be understood (much less enjoyed) by anyone who does not also live here.

On the other hand, I have long been aware that The New Yorker magazine has had many lifelong subscribers over the decades who don’t live here, but for some reason find the magazine's “Talk of the Town” stories (and others) about New York to be worth the price of renewing their subscriptions year after year. I grew up in such a household.

Maybe “Pretend It’s a City” will find an audience of out-of-towners in much the same way that The New Yorker maintains a readership out in those same hinterlands.

Whether or not one lives here, “Pretend It’s a City” is a lot easier to digest than “The White Tiger.”

This is not to suggest that “The White Tiger” is a bad movie. On the contrary, the film is disturbing precisely because of the high quality of its production.

Filmed almost entirely in and around Delhi, the movie provides an unvarnished picture of life in India and the class system that stubbornly persists in that country.

The movie is centered on a dirt-poor young man (played by Adarsh Gourav, above photo, right) from the lower classes who becomes exposed to the lives of the wealthy when he takes a job as chauffeur to the scion of an upper-class family.

The movie’s depiction of the class struggle in a foreign country that we in America do not know well is reminiscent of the Oscar-winning Korean movie “Parasite,” which took up the same theme.

Like “Parasite,” “The White Tiger” is unflinching in the way it depicts the lives of its characters and they world they live in. It is not a fragrant world, to say the least.

If you decide to watch “The White Tiger,” and come upon a very brief scene in which a street vendor is seen beheading a chicken and then tearing it apart basically with his bare hands, you will know you have crossed over to a new dimension in international cinema.