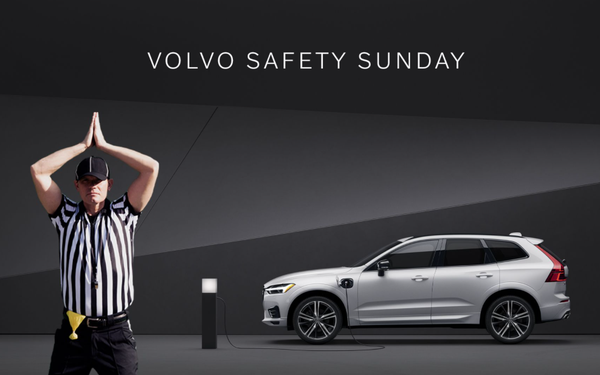 Volvo Car USA is bringing back its Volvo Safety Sunday campaign, encouraging fans to root for a safety during football’s biggest game and a chance to win their dream car.

As part of this year’s “Volvo Safety Sunday: A Million More,” the Swedish luxury carmaker is pledging to give away up to $2 million worth of cars should a safety be scored during the big game on Feb. 7.

Last year, Volvo put $1 million worth of cars on the line to celebrate the more than one million lives saved by the three-point safety belt, a Volvo invention. Neither team scored a safety, so no cars were awarded.

For a chance to win, contestants can visit VolvoSafetySunday.com between Jan. 25 and Feb. 7. Entrants are prompted to design, in any trim and color available in the U.S., what could become their own 2021 Volvo. They can also take a short quiz that will recommend a model based on their lifestyle.

If a safety occurs, Volvo will award $2 million in cars to randomly selected qualified entrants.

A safety, is a relatively rare and unpredictable scoring play in football that occurs when an offensive team is tackled, loses or fumbles the ball, or commits a penalty in their own end zone. It has not occurred during a Super Bowl since 2014.

According to Pro-Football Reference, only 37 games in NFL history (including the AFPA, AAFC and AFL, leagues that were later merged into the NFL) and only seven since the NFL/AFL merger of 1970 have ended with one team scoring a safety (or multiple safeties).

Safety is a huge part of the brand’s core identity, according to the automaker.

In 2020 Volvo sent a signal about the dangers of speeding by limiting the top speed of its new cars. Now Volvo is looking at how smart speed control and geofencing technology could automatically limit vehicle speeds near schools and hospitals in the future.

Additionally, the new Care Key allows owners to put a speed cap on their car when lending it to a younger family member or less experienced driver, to ensure a safer ride.