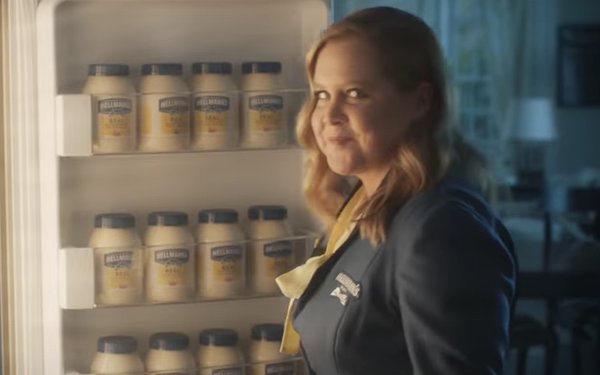 Amy Schumer to the rescue, courtesy of a first-ever spot for Hellmann’s during the annual football extravaganza.

While Hellmann’s dropped a teaser commercial this week featuring the actress and comedian, no one will know exactly what she will be talking about for the Unilever brand until game day.

In the 15-second spot titled “Amy Schumer’s Magical Mayo Transformation,” Schumer opens a mayonnaise-laden refrigerator to the tune of mystical music. Then she smiles, steps inside and sprouts a pair of wings.

The campaign seeks to position Hellmann’s as “a secret helper” in educating people about the global issue of food waste—43% of which happens in the home, according to Ben Crook, senior marketing director for Hellmann’s North America.

“It’s about giving consumers simple tips and tricks in terms of how they can eliminate food waste,” Crook tells Marketing Daily. “Often, consumers aren’t really aware how they’re doing it.”

Hellmann’s decided to use the Super Bowl pulpit to spread a mantra of “make taste, not waste” because “it’s the right opportunity and the right stage” to raise awareness.

“The second thing is the Super Bowl is, in itself, one of the biggest food holidays in American culture. And so often when people prepare for the Super Bowl, they have the potential to overbuy or over-prepare food,” Crook adds.

The campaign is an expansion of the brand’s alignment with the issue of food waste—the subject of this video from last June in which excess food is “rescued” from American farms under the auspices of the Hellmann’s Food Relief Fund.

“Last year, we redirected 1.2 million pounds of food that was going to go to waste, as the restaurant industry was on its knees, to communities in need,” Crook explains.

“We’ve been looking at this issue of food waste for a number of years now, so this is absolutely something we look to continue an effort behind,” he adds.

In line with the United Nation's Sustainable Development Goal of reducing food waste by 50% by 2030, Hellmann's is partnering with the Harvard Law School Food Law and Policy Clinic to push for the federal standardization and clarity of food date labels.

Each year, consumers waste $29 billion because of confusion over the meaning of date labels,  according to the Center for Health and Law and Policy Innovation.

Hellmann's also has made a $100,000 commitment to ReFED—a national nonprofit that works to reduce U.S. food waste.