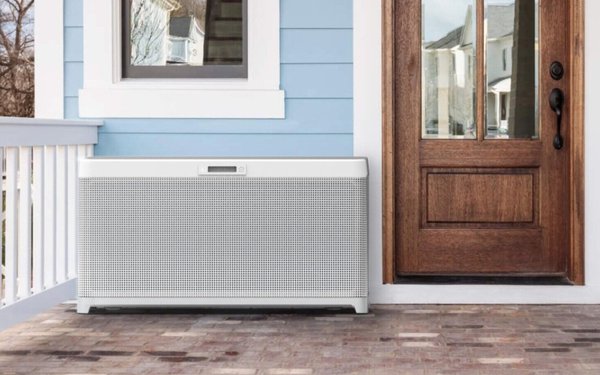 While COVID-19 has turned millions of Americans into semi-enthusiastic online food shoppers, grocery ecommerce is still plagued with the same problems that have dogged it since the 1990s.

Sure, it's nice if you can hang around waiting for the driver. But since navigating limited delivery windows can translate into melted ice cream and iffy salmon steaks, most people wind up schlepping to the store -- at least occasionally.

Walmart is hoping to solve those problems by partnering with HomeValet, an Arlington, Virginia-based smart box manufacturer. The pilot will take place in Walmart headquarters city Bentonville, Arkansas.

D2C FYI: The box is, in effect, a minifridge people put on their porch, right? With compartments to keep groceries cold and even frozen? How much does it cost?

Simms: Yes. An app controls the temperatures and the lock. Walmart has said pilot participants will not have to pay for the unit. And while we're about to start selling them to consumers this spring, we're not ready yet to release the cost.

My father first conceptualized this idea in the late '90s and got his first patent in 2005.

As everyone was experimenting with grocery delivery, it was always clear that it needed so much coordination with the customer. And even as companies began experimenting with secure home delivery, like lockers and Amazon Key, the audience was still pretty small. But with ecommerce exploding, we knew there had to be a better approach. So we started building the software and the hardware.

D2C FYI: So what problems, exactly, does the smart box solve?

Simms: There's a huge consumer benefit because people can get their groceries more conveniently and don't have to wait around for delivery. That will be more important as the pandemic eases and people go back to work. But there's no benefit unless there are retailers that deliver and use the box. So we're trying to solve that with platform connectivity and partnerships. This IoT appliance is very capable, but it's got to be part of an ecosystem.

D2C FYI: But ultimately, consumers will own it, not the retailers?

Simms: Definitely. This will be consumer-owned and brand-agnostic. People won't want it if it's connected to just one store. It works for deliveries from grocery stores, the butcher, wine deliveries. Even if the vendor doesn't have the technology, customers can leave the box open and lock it via the app once the delivery has been made.

D2C FYI: Who do you see as the core market? Is this aimed at very committed e-grocery shoppers?

Simms: Yes, and we think that group is growing. A year ago, there were still many people who said, "I'll buy some things online, but I prefer to pick out tomatoes myself." Months of ordering online has changed their mind. They'd be happy to do all their shopping online if they didn't have to worry about spoilage. And because of the pandemic, many people don't feel safe going to stores anymore. So [the core market is] early tech-adopters and those most worried about virus exposure.

D2C FYI: How big are the boxes?

D2C FYI: And you'll sell these directly to consumers? Will you also sell through retailers?

Simms: That's our marketing plan. But we're exploring all possibilities.

D2C FYI: How else do you see people using HomeValet?

Simms: We think there will be a big market for auto-replenishing perishables. How nice would it be to have milk and eggs delivered without even having to order them? And instead of buying a week's worth of meat at once, having it take up space in the fridge and worrying about cooking it by the sell-by date, people can get it delivered more often, maybe daily. So that will improve the quality and freshness of food.