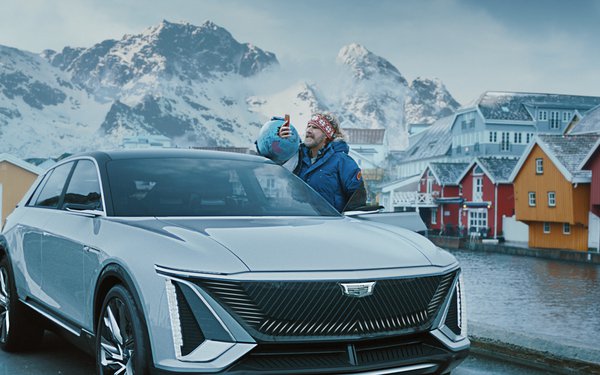 Besides Ferrell, who the automaker used to tease the spot on Monday, the spot from Commonwealth//McCann Detroit also features comedians Kenan Thompson (“SaturdayNight Live”) and Awkwafina (“Crazy Rich Asians”). The latter also recently appeared in a Heineken spot.

The premise of the 90-second spot, "No Way, Norway," is Ferrell discovering Norway far outpaces the United States in electric vehicle adoption. He decides to give Norwegians a piece of his mind and takes Thompson and Awkwafina on the action-packed journey.

A 60-second version of the ad will air during the first quarter.

Also, the use of celebrities in ad creatives have continued to trend. Super Bowl LIV had a record number of celebs appearing in 78% of all ads last year compared to 31% during the 2010 game, per iSpot.tv.

The spot is an extension of GM's “Everybody In” campaign, which launched in January to excite a new generation of vehicle buyers and accelerate EV adoption while showcasing the company's Ultium battery platform. The spot features upcoming Ultium-powered electric vehicles, including the Cadillac LYRIQ luxury SUV and the GMC Hummer EV.

“I’ve been driving an EV since the mid-80s....well, actually it was a regular car with 4 AA batteries taped to the carburetor, but it felt like an EV! We’re coming for you, Norway!!” said Ferrell in a release.

Well over half of the vehicles sold in Norway are electric. Comparatively, EVs made up less than 4% of market share in the United States in 2020. GM’s flexible Ultium platform is designed to improve EV accessibility for all, powering everything from mass-market to high-performance vehicles.

GM is committed to bringing 30 new EVs to market globally by 2025.