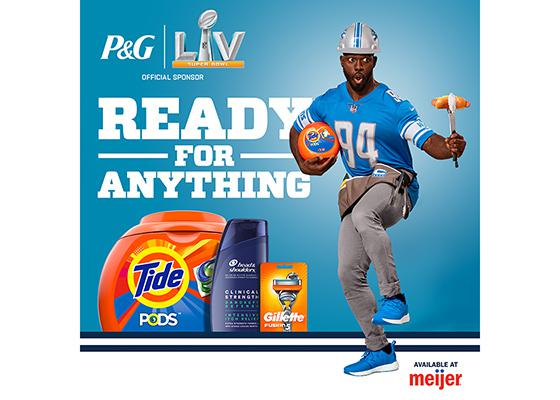 But this year, of course, is a bit different with COVID-19 social-distancing rules still in effect, and health experts strongly discouraging fans from gathering in large indoor groups to celebrate as they watch the big game.

This has created opportunities for Super Bowl-related in-store promotions to take a different tack. The work that Chicago-based agency Blue Chip is doing for Procter & Gamble is a good case in point.

The agency (shopper marketing being one of its specialties) put together a program for P&G, regional big-box retailer Meijer and the NFL with a different theme — "Ready for Anything" — which celebrates fan enthusiasm and shopper patience. And let’s face it, I think it’s safe to say the past year has tried the patience of pretty much everybody at one time or another.

The effort for P&G includes eight brands: Tide, Downey, Bounce, Charmin, Bounty, Gillette, Head & Shoulders and Old Spice. Store Entryway shrouds, supersized displays and pallets loaded with the eight brands’ products, digital and paid social ads are all part of the promotional package, which is localized to six NFL teams that tie-in to Midwest regions where Meijer has stores.

Creative executions feature exuberant fans in team jerseys along with the promoted products. For example, an ad featuring a Detroit Lions fan shows him running with a Tide bottle tucked like a football in one arm, while the other holds grilling tongs with a hotdog in them – implying he’s ready for any stains that come his way.

“The Super Bowl is a rallying point for fan expression,” said Mike Schneider, marketing director at P&G. ‘Ready for Anything’ celebrates fans’ and shoppers’ enthusiasm, patience and resilience this year.”

The social ads provide tips for hosting virtual “Ready for Anything” parties, while ecommerce and store circular ads offer discounts.

P&G has invested in the game in other ways, too, including an in-game Tide commercial.