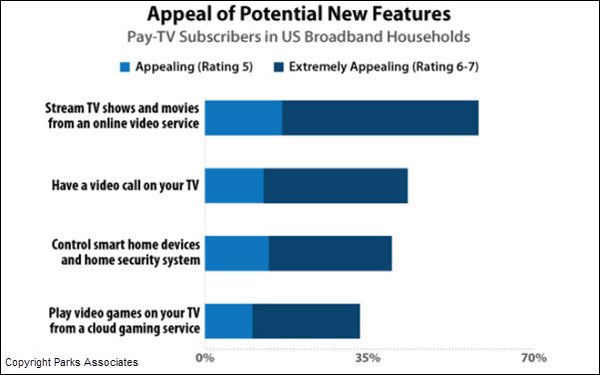 Sixty percent of pay-TV subscribers, or nearly half of U.S. broadband households, are interested in streaming movies and TV shows from an online video service as part of their pay-TV subscriptions, according to new consumer research from Parks Associates.

Rather than doubt OTT’s permanence as in the past, pay-TV providers are starting to respond to the demand: The number of pay-TV subscribers who receive online video services has jumped nearly 50% in a year.

“In late 2019, the market reached the crossover point where the same percentage of U.S. broadband households subscribed to an OTT service as subscribed to a pay-TV service, and now OTT adoption outpaces pay TV by double digits,” points out Kristen Hanich, senior analyst for the market research firm.

However, pay-TV providers “are in a spot where they must redouble their efforts to engage these subscribers by executing new innovations and business models, or risk accelerating customer losses,” Hanich says.

At the same time that online video grew, cancellation rates for traditional pay TV have accelerated. Millions more cancellations occurred in 2020 compared to 2019.

For MVPDs, the questions are how stable the remaining pay-TV customers are and how to minimize cancellations.

Video streaming is the most popular value-added service among pay-TV households, but there is growing interest for other advanced features.

“Pay-TV providers must keep offering their most valuable content, which includes live sporting and cultural events,” says Hanich.  “Additionally, they must offer access to streaming, target new service to their interested customers, and perhaps be willing to take a hit on pricing until this chaotic market stabilizes.”