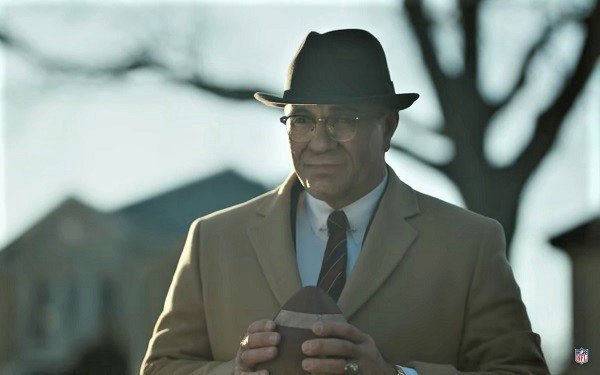 As aspects of last Sunday’s Super Bowl demonstrated, it can be difficult to locate that sweet spot between trying too hard and not trying hard enough.

In the latter category were two errors that may have gone largely unnoticed by most people, but for those who caught them, they were examples of what one might describe as “mediocrity creep” -- a phrase intended to refer to the way in which carelessness in various areas of work (in this case, the presentation of words on TV screens) seems more widespread these days than it used to be.

One of these occurred at some point during the pre-game content on CBS in the hours before the Super Bowl on Sunday.

It was a promo for the CBS Sports presentation, starting later this week, of the 2021 AT&T Pebble Beach Pro-Am. As part of this promotion spot for this very high-profile golf event, the word “Pebble” was spelled wrong. On screen it read: “Pebbel.”

Now, this might seem like a small thing because it is, after all, only one word. But that is the very definition of “mediocrity creep” -- namely, that such a typo in a promo for such an important, well-known event would make it to the air on a network such as CBS that has maintained some of the TV industry’s highest standards for decades.

Or to put it another way, many of us have become accustomed to the onscreen typos, misspellings and other mistakes that have become routine elsewhere on TV -- such as on our local newscasts here in New York, for example.

Mistakes on these newscasts are so common that they have become a running joke for us when we watch them.

That’s bad enough. But CBS? C’mon now, people. We can do better than that!

Another mistake late in the game on Sunday (if memory serves) was observed when a section of seats in Raymond James Stadium just behind one of the end zones was shown. Please note: This was not a CBS error, but one that probably fell within the purview of the NFL.

It concerned the slogan that was the centerpiece of the NFL’s brand-promotion campaign for the 2020-21 football season.

Composed to reflect the challenges that Americans confronted in 2020 -- COVID-19, social-justice protests and our divisive politics -- the slogan was: “It Takes All of Us.” The goal of this well-meaning phrase was to promote civic unity in the face of these difficulties.

The phrase was introduced at the start of the season, and last weekend at the end of the season, it had a very visible presence during the Super Bowl.

Most notably, it was the theme of the NFL’s “Vince Lombardi” video in which a speech from the late, great Packers coach was heard while an actor playing Lombardi was seen on TV screens (pictured above).

So late in the game, the phrase appeared on a series of placards in one of the end-zone grandstands. But unfortunately, the placards were misplaced in such a way that this slogan -- the very centerpiece of a promotion campaign whose grand finale of sorts was the biggest game of the year -- read: “All of Us It Takes” instead of “It Takes All of Us.”

It was like an old comedy movie in which the NFL hires the Acme Sign Company to handle this job and they send the Three Stooges over to take care of it. And then of course, mayhem ensues and it comes out wrong.

To be specific, Curly (or possibly Moe or Larry) positioned the placard (or placards, plural) that said “All of Us” on the left, when those words should have been on the right. And the words “It Takes” then ended up on the right.

Thus, the phrase came out with its two halves in reverse. When seeing something like this, a very general question arises: How does this happen?

One reason might be related to the sprawling, epic nature of the Super Bowl, which has a lot of moving parts, to say the least.

In this case, one moving part was the NFL’s campaign to promote itself while, at the same time, taking on the additional, unwieldy task of unifying our divided nation -- an issue that, when you get right down to it, is not one that the NFL needs to concern itself with.

Besides, the NFL already manages and promotes professional football, a pastime that is so widely popular that it unifies a great swath of America without having to resort to sloganeering.

And in particular, no single event unifies the nation like the Super Bowl itself. Every winter it fulfills what the NFL means to convey in its current slogan: “All of Us It Takes.”