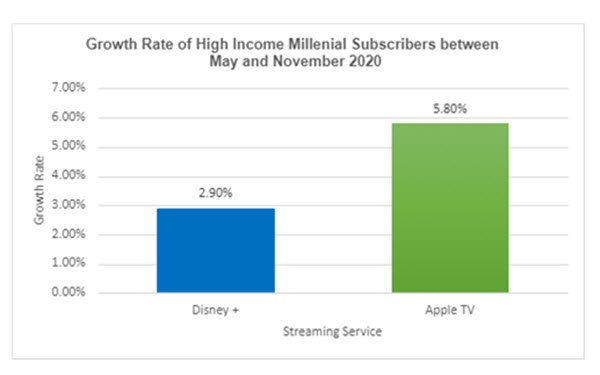 Given Apple’s unwillingness to date to report specifics about the size of Apple TV+, the numbers are unusually murky.

As of February 2020, Bloomberg reported knowledgeable sources saying the streaming service — launched, like Disney+, in November 2019 — had just 10 million subscribers as of February 2020. (They also said that only about half were actively using the service.)

Ampere Analytics’ (admittedly rough) estimate put the streamer’s total “subscribers” at 33.6 million at the end of 2019. Statista cites an estimate putting the total at about 40 million by end of 2020.

None of those numbers speaks to the core issue — at least for comparison purposes with other streamers — of how many of Apple TV+’s users are actually paying the modest $4.99-per-month subscription price.

But as we do know, Apple has been tying a free one-year subscription to the purchase of its iOS devices since TV+’s launch. Which is why Ampere reported that the “vast majority” of the guesstimated 36 million signups as of end of 2019 were unpaid.

The “vast majority” assumption continues to be a solid one. After all, Apple has now extended the free “one-year” offer twice — presumably to avoid a plummet in the number of active users, particularly now that it is promoting its new bundled-services Apple One packages designed to keep consumers tied to the Apple ecosystem of services and devices. Apple TV+ and Apple One are mutually beneficial.

I offer all that as a backdrop, because comparing Apple TV+ to any other streaming service on a “subscriber” basis really isn’t possible.

However, Acxiom has drawn an interesting comparison between Apple TV+ and Disney+ in a new analysis based on two statistically representative surveys of 10,000 U.S. adults it conducted in May and Fall 2020 (October 14 - November 21) to examine the pandemic’s effects on consumer behavior.

Perhaps not surprisingly, Acxiom’s research found that the overall percentage of consumers who reported subscribing to Disney+ jumped from 23% in May to 31% in November across demographics, while those reporting subscribing to Apple TV+ stayed largely unchanged (8% to 9%).

(Again, many or most of the Apple “subscriptions” are no doubt unpaid. But it’s only fair to point out that unknown but significant numbers of Disney+ users are also on free deals tied to Verizon Wireless plans. And other free Disney+ deals, like one through U.S. Mobile, are also out there.)

Here is the interesting part: When Acxiom looked at the data more closely, using its consumer segmentation system, it found that high-income Millennials have been adopting Apple TV+ at a much faster rate than Disney+ during the pandemic.

Those reporting having Apple TV+ subscriptions nearly doubled, from 6.8% to 12.6%, between May and November.

During the same period, affluent Millennials’ subscriptions to Disney+ rose only modestly, from 37.4% in May to 40.3% in November. That was a significantly lower increase for Disney+ than what was seen among other consumer segments.

“This suggests that Disney+, while still very popular, may be reaching maximum penetration among certain demographics like high-income millennials,” which could create an opportunity for Apple TV+ and other services “to capture the attention of those who have opted not to subscribe to Disney+, but who may still have an appetite for additional subscriptions,” says Acxiom.

With Apple TV+’s most recent extension of its free trial period until June 2021, “the company has a window to capture audience loyalty,” ventures the report. “And living up to its full potential will require strategic investments in quality, popular content – a strategy that has paid dividends for Disney+ over the last year.”

While Apple lacks a content archive, it reportedly invested $6 billion in its initial content lineup, and the mega-company has since released a series of high-profile original titles (including the Tom Hanks vehicle “Greyhound”), has signed a first-look deal with Martin Scorsese, and has projects in the pipeline with Steven Spielberg, Oprah, Julia Louis-Dreyfus and others.

Apple wouldn’t be spending that kind of money if building a loyal base of users for Apple TV+ weren’t critical to its grand strategy — and rapid adoption by wealthy Millennials can’t be a bad thing.

How many currently nonpaid Apple TV+ users will convert to paying $4.99 per month for a subscription? I doubt that we’ll ever know. And given its unique position in comparison with other companies with streamers, I doubt that Apple is too worried about that number.

From Apple’s standpoint, paid solo subscribers are but one small piece of a puzzle that includes complex calculations of how much Apple TV+ (and other Apple services) contributes to attracting and maintaining Apple One bundle customers and keeping a maximum number of consumers buying and using Apple services and devices throughout their lives.