Remember Getting Dressed? Shapermint Does 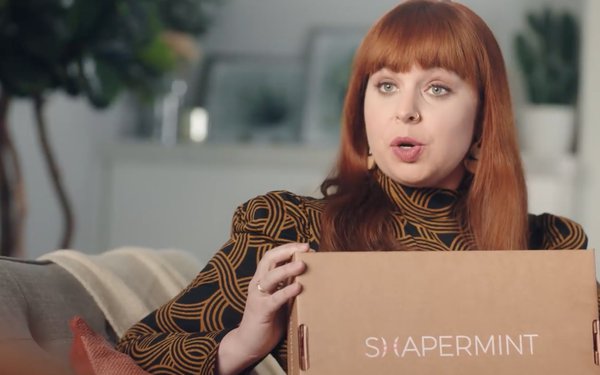 Enough with the jokes about pandemic-driven bralessness. Shapermint is out to end the schlump. And as D2C brands continue to make inroads into intimate apparel, the company says it’s expanding, including a swimwear line set to bow next month. Siobhán Lonergan, chief brand officer, tells D2C FYI about the new approach.

D2C FYI: It’s been a strange time for shapewear, what with working from home and no evenings out. Yet NPD Group data recently reported Shapermint now has a 20% share of the D2C market. What’s powering those gains?

Siobhán Lonergan: Yes, initially our sales declined, but have picked up again, especially in the last quarter. Our best-selling items have been those in line with relaxed dressing: bralettes and leggings.

D2C FYI: Is the new campaign, “Remember Dressed?” meant to encourage women to be a little less…relaxed? It shows a woman having a conversation with her “dressed” alter ego, with Dressed Her reminding Pajamas Her that she can back into something sparkly. Why take that approach?

Lonergan: With so many people working from home, wearing sweatpants under our desks, we wanted to create the connection between getting dressed and feeling better, feeling more productive.

We did a survey, asking about the impact of COVID on self-esteem, and 50% said they feel much better in flattering clothes. And 65% said feeling productive impacts their self-esteem. So there's a correlation with this idea of getting dressed again and being ready for your day, whatever that entails.

D2C FYI: You built a lot of buzz with your last commercial, bringing the Venus de Milo to life with "Feel Like the Masterpiece You Are.” Is this one likely to have the same appeal?

Lonergan: We're hoping. We worked with Near Future on it, and we're pushing on word of mouth marketing, as well as an influencer campaign. The ads themselves are airing on television channels like Bravo, MTV, BET, Hallmark and Lifetime. And now that people are starting to think about potentially changing their behavior, we're hoping this will make them laugh.

D2C FYI: What’s the next part of your growth strategy?

Lonergan: The new positioning we've been crafting over the last quarter, expanding beyond shapewear to bras, leggings and undies. That was the starting point for this campaign. We are very cognizant that the online bra marketing is $3.5 billion. There are 15- and 30-second versions of the ad that feature one of our bras, and then different versions focusing on shapewear bottoms.

And we’re also shifting away from the idea of shapewear as occasionwear, and having people think about it as supportive wear for everyday. We’re focusing on features like support and comfort, connecting the dots through to empowerment and self-confidence. That is really the crux of this campaign.

D2C FYI: Size inclusivity is clearly part of your positioning. How important is that?

Lonergan: We have 4.4 million customers, and we want to make sure everybody is represented. Our sizes go from small to 4XL. We want people to say, 'I feel represented by this brand.’ And we’re really proud of the work we have coming up for swimsuits.

D2C FYI: How old is your typical customer?

Lonergan: She's probably between 25 and 45, depending on the product. The sweet spot is mid-forties.

D2C FYI: While overall apparel sales took a beating for 2020, online clothing represented the only bright spot. How do you think that impacts D2C companies, like Shapermint?

Lonergan: More people buying online, in general, is an advantage. Our model as a D2C company, is to constantly look at consumer insights. We look for trends and have a very short time from production to market. And we have the ability to test new products. So, for instance, if we find that shapewear sales are down, we can pivot marketing to focus on other products.