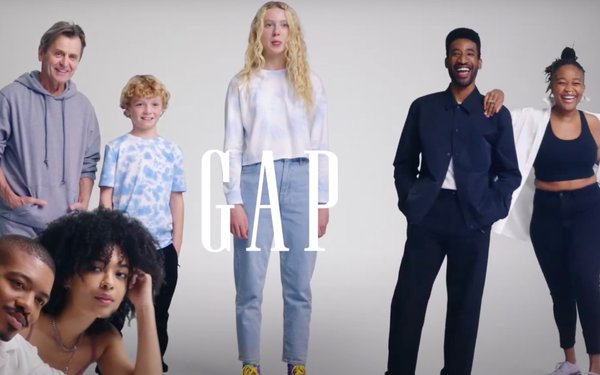 Gap has just introduced its new spring campaign, gathering a crop of dance-happy social activists to show off the season's looks. It hopes the diverse cast, ranging from legendary dancer Mikhail Baryshnikov and skater Evan Mock to chef Melissa King, brings home a vernal blast of optimism, simplicity and activism.

By selecting a dozen or so activists, the company hopes to convey the idea of inclusivity and unity while harnessing the power of each participants' social networks. It's the latest in the retailer's ongoing "Generation Good" campaign, introduced last fall.

Mary Alderete, global head of Gap marketing, thinks each person’s story -- including a trans advocate, a tattoo artist and an antibullying activist -- is compelling in its own right.

"We looked to cast a collective of individuals taking action," she says in an email to Marketing Daily. "Each individual is fiercely unique but is also part of something bigger than themselves. Together they are a force for good -- a culturally relevant reflection of modern American optimism.

The campaign also includes Aurora James, the Brooklyn accessories designer who launched the 15% Pledge. Gap Inc. recently signed on to the initiative, also supported by Sephora, Macy's and Crate & Barrel. The effort is aimed at creating a more equitable industry.

The ads are set to "You Ain't The Problem,"by Michael Kiwanuka.

Besides running on the company’s social channels, the ads are set to begin in early March on Hulu, NBCU, Warner Media, ViacomCBS, ABC and FOX. The campaign is also scheduled to appear in digital, with Complex, Vevo and Snap.

While it's too soon to say what the campaign's social impact may be, Alderete says she’s encouraged by the casts' social media posts, the content they've created and their followers' reactions.

"We're trying to build an authentic community," she says. "And the support from their friends and followers acknowledging their role in the work is amazing. We believe it will continue to engage consumers and ultimately create anticipation for who will be next in the GAP ads," she says.

It’s part of the company’s pivot away from straightforward fashion "what to wear" messages, focusing instead on the idea of being a catalyst for change. "Our consumers are really responding to this approach because it's aligned with their values, too. They recognize the iconic, culture-shaping Gap brand they knew, now coming forward in a more relevant way that reflects the cultural zeitgeist."

As proof of this trend, she points to a surge in organic TikTok videos of the classic Gap logo hoodie, with a vintage hoodie recently selling for $200.

"We are adjusting our product development and timing to respond to this enthusiasm," she says.

The spring line emphasizes the comfort and ease of basics,  like a pocket tee, iconic white shirt, the hoodie in bright colors and an oversized denim jacket.

Sustainability is also a key part of the launch, with the capsule collection launching on World Water Day.

But so far, none of that optimism has shown up in sales. In its most recent quarterly results, sales at the company's Gap division dropped 14%, with comparable sales declining 5%. In part, that's due to a reduced store fleet and lower traffic trends. Last fall, it announced it would shutter 30% of its Gap and Banana Republic stores -- roughly 350 units -- by the end of 2023.