Why Are Media Aggregator Impressions Uptrending? Is CTV Losing Share To Mobile?

As usual, the latest Video Benchmarks Report from Extreme Reach, the digital media and SaaS company, reveals some interesting trends.

One intriguing one in the Q4/full-year 2020 edition: the shifting shares of digital ad impressions for media aggregators versus premium publishers.

The data show aggregators’ share rising by a full 33 percentage points over the year, from just 19% in Q1.

For the full year, aggregators’ average was 42% — still well below publishers’ 58%, but way up from 2019’s 19% average and 10 percentage points higher than their 32% share in 2018, the year with the previous highest average for aggregators.

What’s behind this trend?

Logic tells us that ad fraud/safety issues are likely a key driver.

However, the 2020 trends for General Invalid Traffic Filtered Rates (one of two invalid traffic standards created by the Media Rating Council to measure ad fraud, as digital media buyers know) don’t show any improvement in aggregators’ performance. They continued to lag publishers, at least on this measure. 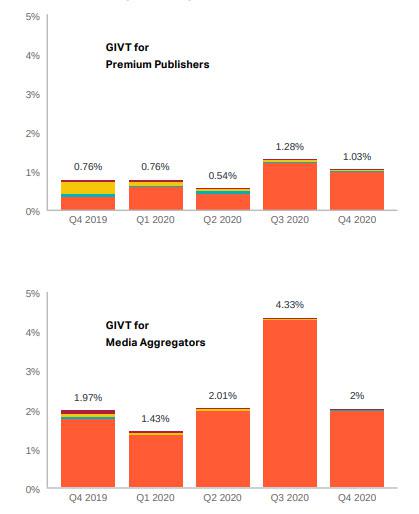 And this hasn’t changed, by and large, in recent periods.

“With the exception of Q3 2020, which looks like an anomaly, GIVT rates for aggregators have been in the 2% range since Q2 of 2019, and premium publishers’ rate has been in the 1% range,” Melinda McLaughlin, ER’s CMO, tells ATV Insider.

However, this is only one metric, and more factors may be at play, she says.

“Ad spend is precious and marketing is more data-driven now than in past years, so wasted spend is a missed opportunity,” McLaughlin says. “Marketers realize that fraud is an ongoing issue in the industry, and we see a range of approaches in how advertisers deal with it. GIVT is one way of detecting and combating ad fraud and invalid traffic, and there are other methods out there.”

On one hand, “brands and agencies in endless pursuit of clean inventory may opt to layer on specific technologies for fraud detection, which have undoubtedly helped buyers feel more confident about aggregator inventory,” she says.

Another theory: More premium publishers are increasing their inventory with aggregators than in years past, “and with more premium content available through aggregators, there is less of a risk for ad fraud or brand safety mishaps,” McLaughlin notes. “Premium publishers are still the safest option when it comes to combating ad fraud. This is a trend we’re continuing to watch.”

Got another explanation, or some additional, relevant data? Weigh in below, or shoot me an email.

The report also offers some insights on CTV advertising use trends — although it’s hard to imagine a less “representative” year than 2020 when it comes to just about anything, and we do need to remember that this is one platform reporting.

And as McLaughlin stresses, the circumstances differ in every quarter, with each quarter reflecting different campaigns, advertisers, publishers, volumes and consumers—meaning fluctuations are normal.

But last year, CTV returned to its 2018 average share of 38%, as  total mobile saw a 12-point average gain, to 39%. (ER began separating out the two types of mobile in last year’s second quarter.) There was also a 6-point resurgence for desktop over the course of the year. All presumably driven by 2020’s work/shelter-at-home dynamics.

It seems a sure bet that as life begins to normalize, and at least some of the white-collar workforce returns to offices, desktop will lose some of its ad gains.

But as we know, ad dollars follow consumers, and while general trends are clear, no one can say exactly how sticky various 2020 behaviors will prove. That’s because no one knows how much of the population will continue to work at home, or how much employment levels will improve (presumably cutting into entertainment viewing a bit), or how other critical factors will play out.

Here’s what McLaughlin has to say about the trends:

“CTV has been the leader in share of impressions served by device in ER’s benchmarks since Q2 2018. We’ve seen the percentage fluctuate, especially in 2020, when work-from-home suddenly became the norm and, understandably, the share of impressions served to both desktop and mobile increased. That said, there is no doubt that the trends for CTV are up and to the right, despite the percentage mix fluctuating.

“We see a wide range of preferred devices across ER’s client base. Some clients have devoted as much as 72% of their impressions to CTV in 2020, while others focused largely on desktop and mobile. ER is the ad server of record for many direct-to-consumer brands, and this is reflected in our aggregate data.

“We continue to see in our data that while many brands are betting on CTV-first strategies, they are also supplementing with other channels. And within our customer base, D2C brands are especially focused on devices that allow them to optimize in real time to measurable behaviors and last-touch attribution.

“We think brands will continue to embrace CTV, because that’s where consumers are going, and more ad inventory is opening up — especially with the plethora of options from TV manufacturers and the amount of original content pouring into those platforms.”