Consumer Spending On Media Soared, While Ad Spending Collapsed in 2020 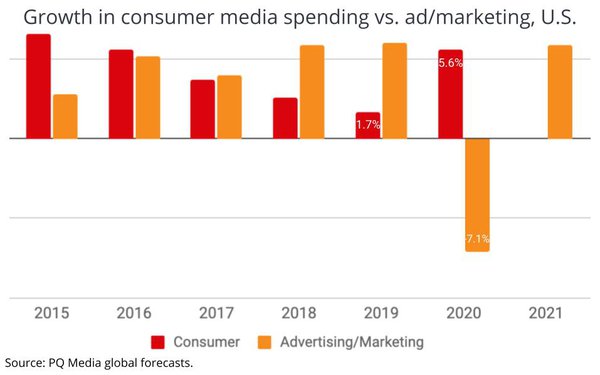 As far as the media marketplace goes, 2020 was a tale of two economies. While advertising and marketing spending experienced one of its worst years after -- decline 7.1% in the U.S. and 6.8% worldwide -- consumer spending on media actually soared, rising 5.6% and 6.1%, respectively.

While the comparisons are not exactly apples-to-oranges, because of the ways PQ categories consumer media, they offer some directional insights on where the economic engines of the media industry are last year, now and for the years ahead.

"For the longest time broadcast TV and radio were considered “free” for consumers, while videogame, books, film and music were considered “ad-free," PQ Executive Vice President-Research Leo Kivijarv explained about the difficulty lining up consumer vs. ad industry spending on media.

"Today, many streaming services and satellite radio are considered 'ad-free'," he continues, noting, "Meanwhile, ad media like out-of-home and yellow-pages have no categories in consumer spending as they are almost entirely advertising (other than the small digital-placed ad networks and consumer reviews in digital local directories)." 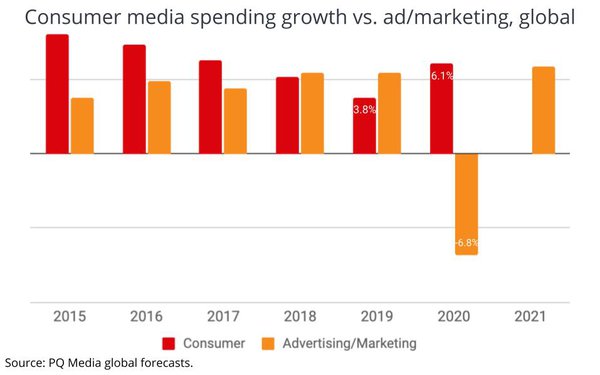