With Jolt Of Color, Macy's Looks To A Brighter Spring 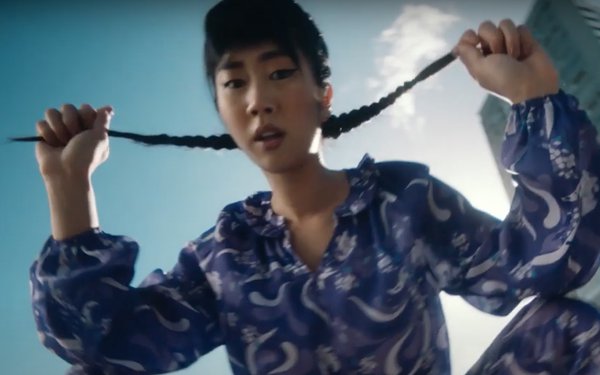 Macy’s hopes a bright, high-energy spring campaign can put shoppers in the mood for apparel again, as department stores continue to struggle with sluggish sales.

Starting with an ad called “Wear What You Love Anywhere,” the campaign aims to remind people of that magic moment when they match a great outfit to their personal style.

With a TikTok-inspired vibe, it features a skateboarder, a gymnast and an Insta-fame seeker, and “celebrates the carefree power of wearing exactly what you want wherever you want,” the company says in a release.

The idea is to “celebrate the many ways that expressing your own personal style can make even the most mundane and routine moments feel memorable and fun,” says Abigail James, Macy’s senior vice president of customer interaction, in an email to Marketing Daily. “Our approach is about storytelling in a more dynamic and visual way that illustrates contemporary fashion and culture in a way that will feel fresh for Macy’s.”

Pandemic-weary customers are looking for a sense of normalcy, she says. And Macy’s customers “have never stopped wanting to use their style to show their individuality, even if it’s just for a trip to the grocery store.”

The campaign focuses on bright colors in mix-and-match pieces, graphic and retro florals and what James calls “the Minimalist Moment,” with  classic silhouettes in monochromatic and neutral hues.

The ads, created by Major Behavior, are set to run on TV, digital, and in print.

For Macy’s and other retailers, spots like this may do the trick, inspiring people to start shopping the way they used to.

Industry observers say it isn’t that consumers aren’t in the mood to spend. They’ve already stepped up spending in many areas, cheered on by warmer weather and accelerating vaccination rates. And many think the passage of the new stimulus bill will intensify consumer spending.

But the occasions that typically trigger a shopping trip -- an upcoming wedding, a night on the town, a vacation or important meeting at work -- are still rare. Department stores like Macy’s have taken the brunt of the decline.

“Department stores remain in the eye of the storm as mall traffic and apparel demand remain weak, trends that we expect to continue at least through the first half of 2021,” writes Christina Boni, senior vice president at Moody’s Investors Service, about Macy’s results.

The National Retail Federation believes that retail sales in the year ahead will gain between 6.5% and 8.2%, reaching more than $4.33 trillion. It says those gains hinge on vaccine rollouts.

“Ensuring that the American people are given the opportunity to quickly and safely get vaccinated against COVID-19 is the most critical component of the legislation,” writes Matthew Shay, CEO of the NRF, when the bill cleared the Senate. “The retail industry has been front and center throughout this crisis and remains engaged by providing vaccines to employees and consumers in communities they serve across the country.”