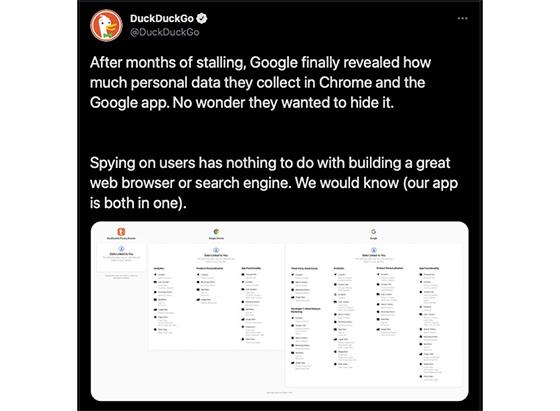 Google is under fire for reportedly collecting data about users, even in incognito mode, which is intended to allow people to search and use its services in private, without collecting data.

"The court concludes that Google did not notify users that Google engages in the alleged data collection while the user is in private browsing mode," U.S. District Judge Lucy Koh in San Jose, California, wrote in her ruling.

Google may hold the majority of search activity worldwide, but there is an increasing trend to drop the search giant for one with a focus on protecting consumer privacy. There are now a slew of privacy-focused search engines coming to market or gaining momentum such as Brave, Startpage, and DuckDuckGo.

Google may have one view of privacy, but Apple holds another. Apple in December launched what it calls a "privacy label" in its app store that requires it to list the type of data collected. In the “Labels” section of Apple’s Privacy page, those viewing the list can see every privacy label for all apps Apple makes that run on iOS, iPadOS, macOS, tvOS, or watchOS.

Google added privacy labels in February to its Gmail app, marking the first of its major applications to receive one apart from YouTube.

The image attached to the tweet, as 9to5mac points out, shows side-by-side comparisons of the DuckDuckGo App Store privacy label, Chrome, and Google apps. The DuckDuckGo privacy label shows it does not collect user data, but the same can’t be said for the Google and Chrome apps.

The Google and Chrome privacy label show that data such as location, browsing history, financial information, search history, and more are linked to the user for purposes such as analytics, personalization, and third-party advertising.

The App Store privacy labels -- which act as a “nutrition label” -- went live in December. They were introduced at WWDC last summer, with Apple saying the goal is to better inform consumers of the privacy practices of individual applications.

DuckDuckGo continues to capitalize on the move to increase the amount of online privacy people can depend on.

Maps, a little-known feature developed by the privacy search engine, lets people search for directions and locations of businesses using Apple Maps to power the map-based search results by default on Apple devices. On non-Apple devices, the direction feature defaults to Bing. At least it did in 2019, when the company built the feature.