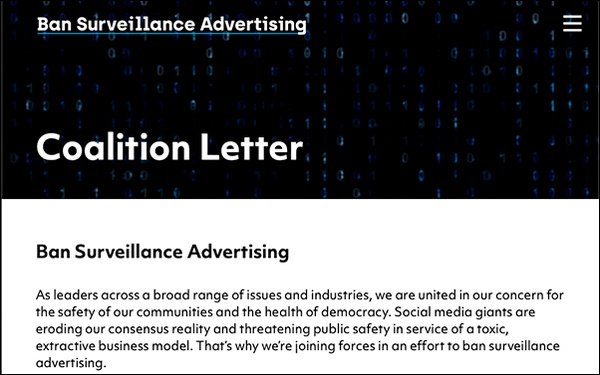 A broad coalition of advocacy groups and Big Tech critics are seeking to prohibit Google and Facebook from engaging in “surveillance advertising,” which the organizations describe as ad-targeting based on the extensive tracking and profiling of consumers.

“Social media giants are eroding our consensus reality and threatening public safety in service of a toxic, extractive business model,” the organizations say in an open letter posted Monday.

“Surveillance advertising -- the core profit-driver for gatekeepers like Facebook and Google, as well as adtech middlemen -- is the practice of extensively tracking and profiling individuals and groups, and then microtargeting ads at them based on their behavioral history, relationships, and identity,” the groups write.

Organizations that are signing the letter include longtime privacy advocates like the Center for Digital Democracy, consumer watchdogs like Public Citizen and Fight for the Future, and critics of Big Tech like Accountable Tech, the American Economic Liberties Project (which advocates for antitrust enforcement) and The Real Facebook Oversight Board.

Sarah Miller, executive director of the American Economic Liberties Project, says the coalition's main focus is currently the “unique dangers when surveillance advertising is used by big platforms like Facebook and Google.”

The coalition's open letter suggests that targeted ads are at least partially responsible for other woes connected to the tech industry, including the proliferation of fake news and the decline in newspaper revenue.

“Big Tech platforms amplify hate, illegal activities, and conspiracism -- and feed users increasingly extreme content -- because that’s what generates the most engagement and profit,” the groups write. “And surveillance advertising is further damaging the information ecosystem by starving the traditional news industry, especially local journalism. Facebook and Google’s monopoly power and data harvesting practices have given them an unfair advantage, allowing them to dominate the digital advertising market, siphoning up revenue that once kept local newspapers afloat.”

Newspaper revenue has declined dramatically in the two decades, but industry watchers have said print media lost a significant chunk of ad revenue to Craigslist and other online classified listings.

Some members of the diverse coalition calling for an end to "surveillance advertising" are hoping for a broader prohibition on ad targeting.

Jeff Chester, executive director of the Center for Digital Democracy, says the organization supports a ban on data-driven advertising.

While the open letter calls attention to Google and Facebook, the coalition's definition of surveillance advertising appears to be broad enough to rope in other ad-tech companies.

“We can build a privacy-first internet that still provides promotions and ads that are relevant and supports the rich digital content supported by ad revenue,” President and CEO Leigh Freund states. “Banning abusive uses of data is a much better approach than banning the tailored ads that help small businesses reach niche markets and stay competitive.”