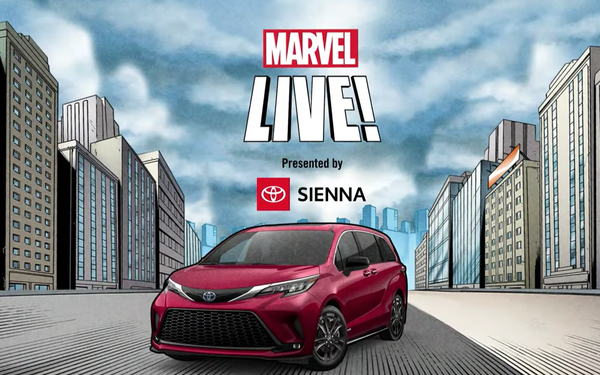 Toyota Motor North America has joined forces (presumably for good and not evil) with Marvel Entertainment.

“We thought it would be a great opportunity for the brand to celebrate our fans, our guests and ultimately, to see what’s possible when you combine the ability to go anywhere (with the Toyota Sienna) with the power of storytelling and imagination (with Marvel),” Nanclares tells Marketing Daily.

This is Toyota’s first time working with Marvel. The sponsorship includes a custom comic book cover featuring the Sienna with Marvel heroes that will be available digitally via Instagram as well as for a select number of printed copies.

In collaboration with Conill and lead AOR Saatchi & Saatchi, Toyota and Marvel produced three episodes of "Marvel Live! Presented by Sienna." Each episode features an interview with a writer behind a notable comic book title.

The 11-minute episode discussing "Children of the Atom" and "New Mutants" premiered on YouTube March 22. It features an interview with Vita Ayala, an Afro-Latinx comic book writer who is currently working on Marvel Comics’ X-Men titles.

Launched earlier this month, the first episode, “America Chavez: Made in the USA,” featured comic book writer Kalinda Vazquez. Chavez is the first Latinx LGBTQ superhero to lead her own series.

The activation is part of the overall campaign themed “The Sienna Life" that aims to inspire consumers to live their life to the fullest.

“As a versatile minivan, we know that the Sienna can and has served multiple generations of guests, from grandparents to new parents, and even young partners seeking adventure,” Nanclares says. “With all this in mind, just like the Sienna, comic books are enjoyed by different generations of readers, from those familiar with the very first stories to more recent readers possibly enjoying the stories with their families.”

“Lexus is a separate brand and I can’t speak to their partnerships,” she says. “But we at Toyota are constantly exploring innovative ideas with our agency partners and we continue to diversify our strategy to ensure we connect with our customers across the platforms they know and love.”