In Its First Campaign, Lily's Sweets 'Reimagines' The Chocolate Experience 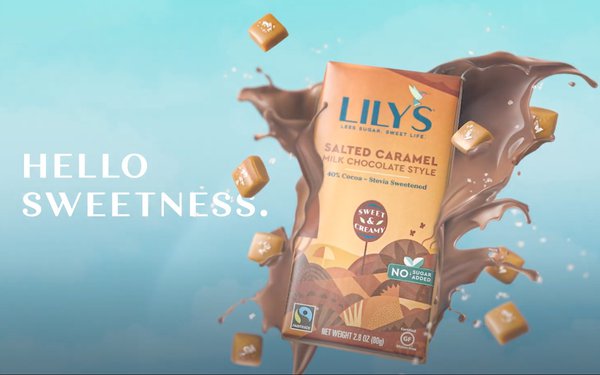 Having achieved more than 200,000 points of distribution since its founding in 2010, Lily’s Sweets is launching the specialty chocolate brand’s first advertising campaign.

It's called “Sweets, Reimagined” and is designed to overcome the #1 barrier for persuading consumers to try a sugar-free or low-sugar candy: taste.

A main differentiator of Lily’s products is that they get their sweetness from the stevia plant.

Launching this week, a 15-second spot titled “Hello Sweetness” eschews a voiceover in favor of visuals of three Lily’s chocolate bars. It ends with the notation “The future of sweets has arrived.”

Until the onset of COVID-19, one of the brand’s main tactics for generating trial and awareness was in-store sampling, since 87% of people buy chocolate based on taste, according to Lily’s Chief Executive Officer Jane Miller.

Despite being the #3 specialty chocolate brand after Lindt and Ghirardelli, “We actually have very low awareness and relatively low household penetration, too,” Miller tells Marketing Daily.

Asked whether Lily’s would have launched the campaign in the absence of a pandemic, Miller adds, “Absolutely. As a brand, what we’ve tried to do is first build a really strong distribution footprint before we layered on any kind of marketing.”

“We wanted to try YouTube advertising specifically because video is a new advertising medium for Lily’s and YouTube is a great way to digitally try out video advertising.”

According to Senior Director of Marketing Lauren Start, the target audience is people ages 35+, and it skews more female than male. They are either looking to cut their sugar intake because of diabetes or other health issues or are on an intentional wellness journey.

“Part of the benefit of a digital campaign is, it’s easier for us to target these consumers,” says Start.

Agencies involved in the campaign are Motive and M Booth.