Podcasting Is Putting The Sizzle Back In Radio -- Er, I Mean Audio -- Advertising 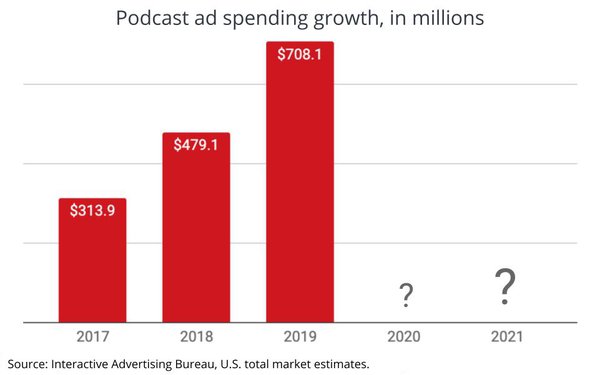 Watch for audio advertising to be one of the biggest media rebound stories this year, with an ample assist from podcasting, which will take an even greater share of the audio ad marketplace due to two related factors: the decline of terrestrial radio advertising during the 2020 ad recession, and a corresponding rise in demand for podcast ad inventory.

The Interactive Advertising Bureau is not scheduled to release this year's U.S. Podcast Advertising Report until its annual Podcast Upfront in May, but if the market's recent growth trending is any indication, U.S. podcast ad spending should top $1 billion for 2020, and even more this year.

"Newer forms of radio -- including podcasting, but also streaming audio services -- help provide some “sizzle” to the medium, although the local orientation of radio’s advertiser base constrains growth," GroupM Global Business Intelligence President Brian Wieser called out in his recent U.S. advertising update -- which, based on my back-of-the-envelope calculations, would give podcasting more than an 8% share of the $12 billion in overall "radio" ad spending in 2020, and something close to 10% by the time 2021 figures are accounted for.

What does this mean for mobile, you ask? Well, for one thing, it means an increasing share of audio ad spending will be attributed to smartphones, headphones and other mobile devices. It also means it's a good time for the terrestrial radio industry to market more frictionless ways for consumers to receive FM signals via smartphones, and ultimately for regulators to do the same for AM.

Like video before it, Madison Avenue is becoming "audio"-agnostic, but will do what it always does with new, emerging and transforming media platforms: follow consumers where they go.

advertising, audio, covid-19, podcasts
2 comments about "Podcasting Is Putting The Sizzle Back In Radio -- Er, I Mean Audio -- Advertising".
Check to receive email when comments are posted.
Read more comments >
Next story loading