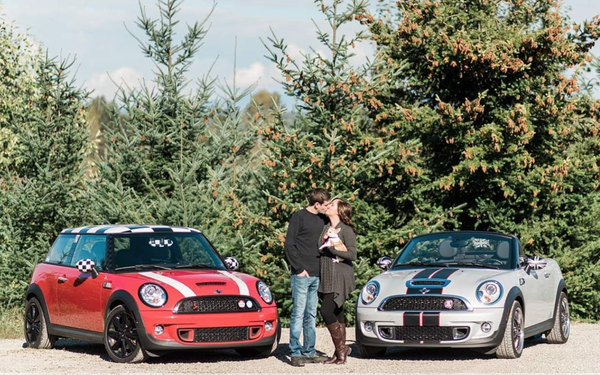 Several automakers are taking an unscripted approach to their marketing efforts.

People love to make fun of the Chevrolet “Real People” spots. But hey, everyone knows those ads are from Chevy, so they are clearly killing it. It’s like the expression goes, say anything you like about me, just spell my name right.

Mini USA is the latest putting actual consumers into its promotional efforts, sharing the stories of five couples who met and fell in love thanks to their shared love for Mini.

Last month, the automaker kicked off the story-telling campaign on Valentine’s Day, putting out the call to the brand’s loyal owner community to share their love stories on social media using #MiniLoveStories.

Since then, owners have been submitting their heart-warming stories. Now on the occasion of Great Lovers Day, April 2, Mini USA has begun highlight a few of these unique stories which will appear over the next several days on the brand’s Facebook and Instagram channels.

An overarching theme of the #MiniLoveStories initiative is that while we’re all different, we are better when we unite together. This supports Mini’s ethos, which remains centered around the idea of celebrating individuality while creating a strong, passionate community of people, united by a common bond to Mini.

“People really love their Minis, so when people find love for one another that runs stronger than their shared passion for Mini, it is a really special moment to celebrate,” said Rah Mahtani, brand communications manager, Mini USA. “Mini brings people together, and as we say, it’s the only car that comes standard with friends. Sometimes you even find love!”

The first couple, Melinda and Josh, met at a Mini meetup in New Hampshire facilitated by one of the many Mini clubs across the country, and ended up getting engaged at Mini Takes Vermont. They are now currently living happily married in Utah.

Another couple, Haley and Matt, met virtually from different sides of the Pacific -- Matt in Australia and Haley in Arizona. The  couple met when Mat spotted Haley’s Instagram account for Jax – her new Mini. The couple hit it off and are now planning to get married later this year.

A third couple, Ashley and Nick, met when Nick noticed Ashley’s dating profile featured a lot of Minis (she currently owns five!) Nick sent her a message about his Mini -- and many drives and dates later, they are happily married and love their Minis.

The story of two additional couples will be shared, according to the brand, which is encouraging more fans and owners to continue sharing their love stories.

Cadillac is also taking an unscripted approach to its marketing. Instead of random owners, the automaker got some celebrities behind the wheel of its Escalade with Super Cruise technology. The Jonas Brothers, Tiffany Haddish, Sofia Vergara and others agreed to be filmed checking out the hands-free technology.

“The team was brainstorming about this last year, and what came up was that one of the things that is so memorable, whether you are driving or watching, is the the first time someone takes their hands off the wheel,” Cadillac CMO Mellisa Grady tells MediaPost. “And so the idea came about: What if we showed people who are very expressive and who haven't been in Super Cruise before? What if we showed them having their ‘let go’ moment? That was the impetus for this campaign.”

The creative has some parallels to Chevrolet’s “Real People” campaign, Grady acknowledged. But celebrities have a lot more reach.

The General Motors luxury brand projects that the effort will reach upwards of 167 million Instagram users and 48 million Twitter users based on the collective number of followers of all the celebrities, who also include director Elizabeth Banks.

That’s a lot of eyeballs for what’s primarily an unpaid social media effort.