Thanks To COVID, Movies Are Now TV 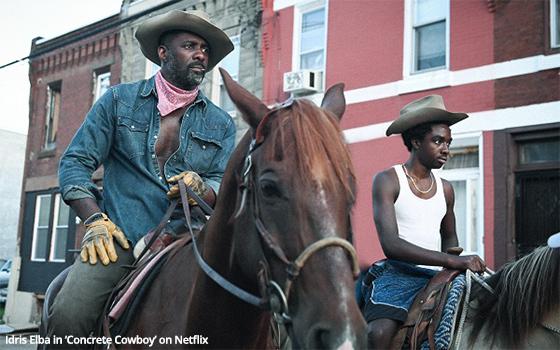 “Concrete Cowboy” was great and “Mank” stank, but this is not a review of these two movies currently streaming on Netflix.

The topic here concerns the current state of the motion-picture industry and how it is converging with television so swiftly that the two are now more or less the same thing. And the winner looks to be television.

Television was already overtaking movie theaters even before the COVID-19 pandemic arrived and shuttered movie theaters. Many are re-opening now, but capacity is restricted. And many have also closed permanently.

In addition, the major studios are playing hardball with the major theater chains, according to stories that have popped up in the business press many times over the past year.

In that time, studios such as Disney have adopted streaming-first strategies that include granting small windows (or no windows at all) for theatrical releases of major movies because the studios prefer that their big releases go as quickly as possible to their streaming services where the majority of their audiences are now going to find them.

Many in the TV and movie businesses are coming to the conclusion now that the days are numbered for the business of presenting movies in theaters -- except maybe for a category of spectaculars that simply cannot be experienced fully unless seen on a big screen.

Taking a very long view, TV has competed for the leisure time of moviegoers practically since the dawn of the television industry.

In the 1950s, movie studios adapted to the runaway success of TV as a new home-based entertainment source for millions by coming up with visually stimulating technologies such as VistaVision (to name one of them) that were designed to provide a big-screen experience that could not be duplicated on the era’s primitive TV sets.

And for decades afterwards, movies had their place and TV shows had theirs, and people still went to theaters for an experience they could not get from their TV sets. It is worth mentioning that the movie studios also got into the business of producing TV shows.

But more recently, the technology of home TV sets has advanced (along with the equipment with which motion-picture entertainment is produced) to the point where the home-viewing experience is often more than satisfactory for many people and their families.

As a result, trips to movie theaters declined as more people set up advanced viewing systems in their homes. Not surprisingly, this trend accelerated when COVID-19 disrupted entire societies and lifestyles.

Moreover, to return to the subject with which this TV Blog began, watching movies on a streaming service will always be cheaper than taking the family out to a movie theater.

Where the two movies mentioned above are concerned, I (and the person I watched it with) loved “Concrete Cowboy,” in which Idris Elba (above photo, left) leads an ensemble cast in a story about a group of men and women in a very old North Philadelphia neighborhood who struggle to maintain an ancient stable and its equine residents.

As far as I could determine from a Google search, this movie was not seen in theaters before it turned up on Netflix earlier this month.

By contrast, my movie-watching companion and I were disappointed by “Mank,” in which Gary Oldman plays screenwriter Herman Mankiewicz as he struggled to write the screenplay for “Citizen Kane” (released in 1941).

We were interested in “Mank” (which has been on Netflix since December) because it has been nominated for 10 Oscars, the most of any movie this year.

After we watched it, we both felt that the people who nominated this movie for these Oscars should have their heads examined.

But the good news is, we expended almost nothing to watch “Mank,” which would not have been the case if we had spent money and time seeing it in a theater.

Watching a movie that you don’t enjoy is certainly easier at home where, good or bad, the experience costs no more than our monthly Netflix subscription fee.

Besides, if a movie seen at home is disappointing, there is always something else to watch that might be better. In this case, that movie was “Concrete Cowboy.”

digital, entertainment, movies, netflix, streaming, television
1 comment about "Thanks To COVID, Movies Are Now TV".
Check to receive email when comments are posted.
Next story loading