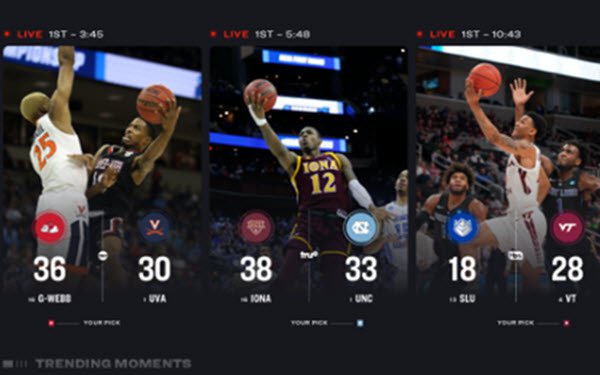 Streaming reach is the number of Roku households that streamed channels carrying the games while they were live.

Roku also reports that about 58% of those who watched the 2019 tournament on traditional linear TV via Roku did not return to traditional TV to watch this year’s tournament, while 25.5% of those have streamed a channel carrying the games during the games’ live coverage.

Through the national semifinal games on April 3, traditional linear viewers over age 18 declined about 23%, while 80.4% of TV streaming was by viewers between 18 and 49, reports Roku.

Roku’s analysis also showed that the higher the seed of a team within a Final-Four market, the higher the percentage of active Roku TV households that tuned into semifinal games on traditional linear TV.

While CBS’s 17 million average viewers for this year’s Baylor-vs.-Gonzaga title game on Monday was down 14% from 2019, ViacomCBS presumably benefitted from streaming gains via Paramount+, which carried the game and shared the tournament with Turner Sports, notes Deadline.

The COVID-19 pandemic — which caused 2020’s NCAA tournament to be cancelled — drove an overall surge in streaming, and no doubt helped accelerate the growth of streaming device adoption.

Roku, which worked with Dentsu’s Amplifi to generate the tournament data for Dentsu clients, points out that basketball is not alone in seeing a consumer shift toward live-streaming games.

“This is the latest example of the transformation shift occurring in TV viewing behavior,” states Roku National Brad Team Lead Kristina Shepard. “What we’re seeing is reflective of a change taking place across all the major sports as they returned from a pandemic-induced pause.”