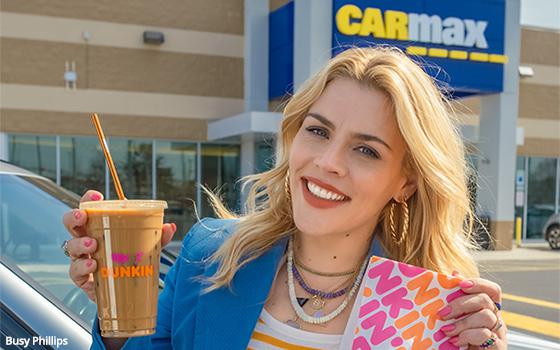 CarMax and Dunkin’ are joining forces for a promotional campaign linking up 24-hour test drives with drive thru services.

CarMax’s agency, The Martin Agency, approached the fast-food chain to cleverly play off how “American runs on Dunkin’,” in a way to encourage consumers to use those coffee and donut runs as a way to test whether a certain car is right for them. Dunkin’s large footprint and its long history of innovating for customers is what drove this particular partnership, adds a Martin representative.

The initiative rewards those taking a CarMax test drive, through May 16, with a $10 Dunkin’ gift card. CarMax is also offering 24 people the chance to win free donuts for a year, and an exclusive donut holder for their new ride.

Digitally, The Martin team developed a custom Instagram filter that offers guidance on which car they should test drive based off their favorite Dunkin’ donut flavor.

To help raise awareness, actress Busy Phillips and Olympic skater Adam Rippon are paid endorsers who will leverage their own social media networks. The Instagram videos, released April 12, star both actors taking people behind the scenes of their own test drive experience while encouraging fans to do the same.

Both personalities were selected for their large followings and organic connection to the brands, explains the spokesperson. Phillips is more the CarMax pitch person with her “open and authentic personality,” the rep adds. “We love her transparency, which is such an important thing to us at CarMax. We felt she’d really let people into her thought process in trying out a car for this amount of time.”  She also is legitimately searching for her next car after a recent move.

Meanwhile, Rippon’s addition plays off his “doin’ donuts” on the ice as an accomplished skater. In addition to his “bubbly personality,” his 24-hour adventure focuses on acquiring his donuts, but “now with some sprinkles and a side of iced coffee,” jokes the rep.