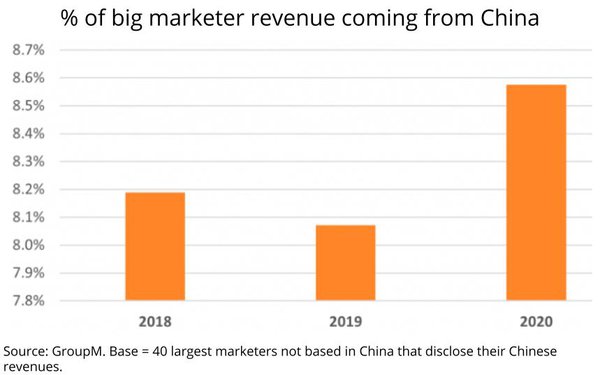 As trade tensions with China continue, a new report from GroupM's Business Intelligence unit indicates the nation currently accounts for about 5% of the revenue for the world's biggest marketers.

The analysis, conducted by GroupM Business Intelligence Global President Brian Wieser, analyzed the 40 biggest marketers not based in China. Based on the those disclosing the revenue they derive from the nation, Wieser estimates China currently accounts for about 5% of the Big 40's revenues overall.

The analysis is not the first time Wieser has assessed the potential impact that trade tensions with China could have on U.S. brands. Previously, Wieser published a couple of analyses indicating that China's big marketers also have become a major source of ad spending in U.S. media outlets, especially Facebook.

In an August 2019 report, Wieser estimated Chinese brands would spend between $5 billion and $8 billion in advertising on Facebook promoting their products and services to Americans.

"One of the issues with the greatest potential to impact large marketers at present relates to matters currently involving China," Wiser writes in this week's report, noting: "In recent weeks, many of the world’s largest apparel brands have been impacted by boycotts (or threats of the same) associated with statements those brands have made regarding their supply chains and reports of the use of forced labor of the ethnic Uighur population in the Xinjiang region. And then this week, a US State Department spokesman – referencing the issues in Xinjiang among other human rights issues – made comments which conveyed that the US government and its allies are contemplating a boycott of next year’s Winter Olympics, which are scheduled to take place in Beijing."

Wieser concludes by noting that while the State Department has "walked back" the comments, "it seems unlikely that the matter is closed."