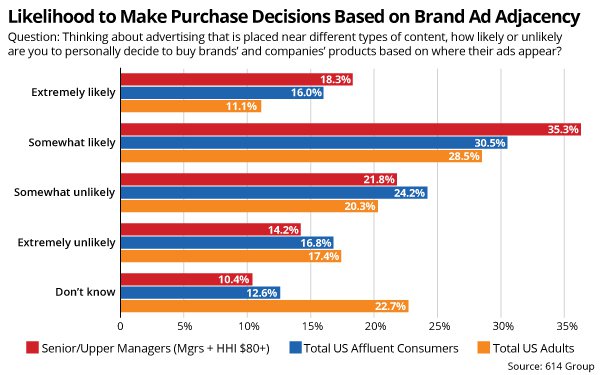 Consumers still have concerns over where they see advertisements, especially for brands they love and admire. Two specific demographics have the highest concerns, compared with the general population.

“People are more concerned today compared with two years ago, but it’s still surprising that they do notice,” Rob Rasko, CEO at The 614 Group. “It’s right in our eyes. People do notice what’s going on with brands and the advertisements they run.”

The findings, which The 614 Group will announce with the 2021 summit series events, will publish on Wednesday in the Brand Safety: 2021 Topline Perceptions study. The 614 Group study was commissioned through YouGov. The data analyzes brand safety for all audiences.

The findings show that two demographics — affluent adults and those in senior-level management positions — have heightened concerns about brand safety in comparison to the general U.S. population. Just as important to marketers, these groups are more likely to allow those concerns to impact buying behavior.

When asked in a survey if they are more or less concerned about where the ad appears, compared with two years ago, consumers who make a household income of more than $80,000 annually, and senior-level managers in the same income bracket report higher concern about ad placement than the broader U.S. population.

It turns out that where the ad appears has a greater likelihood of influencing purchase decisions in specific B2C and B2B audiences — affluent, 46%; senior managers, 53%; and general population, 39%, according to the findings.

Survey participants also were asked their opinion on seeing an advertisement that appears next to content they are not comfortable with, and how it might affect their views of the company or brand that placed the ad.

Between 10% and 11% of all survey participants said it does not change their opinion of the company or brand that ran the ad, but between 27% and 28% said they are less likely to use the brand’s product when a company or brand supports content that expresses their political views the consumer is not comfortable with.

Some 19% of adults also said when a company or brand buys ads near content that is not in line with their social views, they are less likely to use their product.