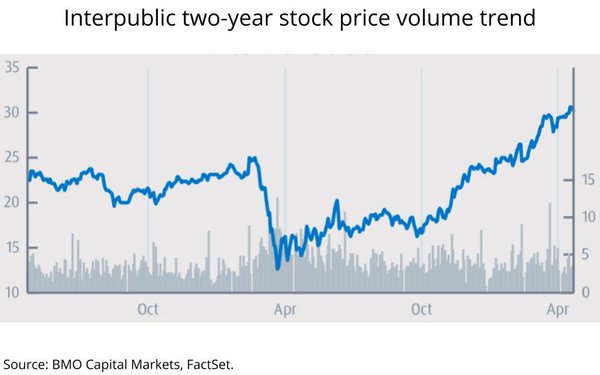 A top Wall Street analyst has ended a decade-long "outperform" rating for Interpublic, downgrading it to "market perform," the same rating currently bestowed on other publicly traded agency holding companies.

"This downgrade brings a decade-plus recommendation to a close," BMO Capital Markets' Daniel Salmon said in a note sent to investors this morning, explaining: "Over that period, IPG outperformed the group by more than two times (and trust us, there were much more difficult quarters than this one!), driven first by a turnaround margin opportunity, and then by organic revenue outperformance, including since acquiring Acxiom."

The decade, which was overseen by former IPG CEO who took the helm of the holding company -- the parent of iconic media-services brands such as Mediabrands, and its Initiative, UM, Magna, and IPG Media Lab operating units -- at a time when it was financially unstable and facing shareholder revolts.

By focusing initially on getting IPG's financial house in order, and ultimately on expanding via deals like its epic acquisition of Big Data giant Acxiom, Roth this year turned IPG over to his heir apparent, Philippe Krakowsky, and BMO's Salmon implies the downgrade was related to a more stable -- and lower growth trajectory -- for the holding company.

"The hand off from former CEO Roth to new CEO Krakowsky has been seamless," he noted, adding: "Krakowsky was for a key executive supporting Roth for nearly two decades and, among other things, lead IPG’s acquisition of Acxiom (more on that opportunity here). Finally, we think IPG can continue to lead organic revenue growth over multiple years among this market perform rated set owing in part to outsized exposure to the healthcare and technology verticals."

Salmon this morning issued updates for two other members of the "market perform rated set" -- Omnicom and WPP -- raising Omnicom's stock share target price to $80 from $68, but leaving WPP's "unchanged."

"We believe the most important long-term challenge remains competition at the edges with IT services/consultants and the increasing balance of 'business transformation' vs. paid media and marketing services work," Salmon writes of WPP, adding: "While disintermediation risk from major internet platforms remains an issue, the market has generally put the issue in much more appropriate perspective today, helped by the fact that many of them have become huge clients of the holding companies. The biggest revenue opportunities remain new ecommerce services, first-party data management, analytics services and retail media, among others. We believe there may also be more opportunity for real estate and travel savings from more hybrid work for the real assets of these companies: the employees that go up and down the elevator (or check in on Zoom) each day."