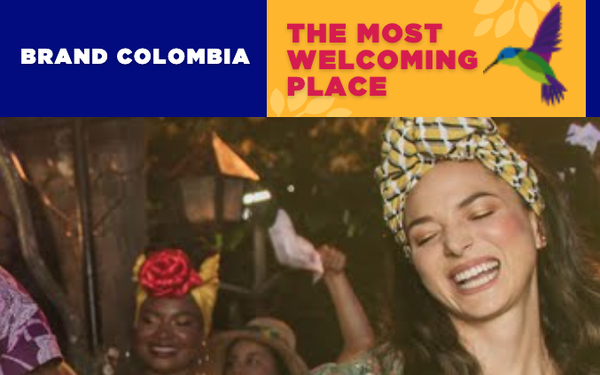 ProColombia, the government entity in charge of promoting international tourism, is launching a new brand manifesto for the South American country.

“The most welcoming place on Earth” slogan was inspired by the welcoming spirit of the Colombian people. It is a long-term message that will be leveraged in marketing and sales communications campaigns to inspire future leisure and business travel, foreign investment, and strengthen export promotion, according to the organization.

The slogan is backed by quantitative and qualitative research, with more than 1,500 surveys and focus groups that uncovered the essence of the Colombian people.

“Warmth and kindness were apparent and clear proof points that allowed us to design and validate the manifesto,” according to a spokesperson. “It also comes at a time when the foreign promotion of Colombia has become more important than ever before.”

Colombia found itself facing exceptional circumstances during the pandemic. But the hardships brought out the best of Colombians, says Flavia Santoro, president of ProColombia.

Colombia is poised to be a top destination this year and has already made top travel lists such as “52 places to love in 2021” by The New York Times.

For eco-conscious travelers from the U.S., Colombia is the second most biodiverse country in the world, with 10% of the earth’s flora and fauna, according to ProColombia. The country has also recently become a founding member of The Future of Tourism Coalition, with international organizations such as Green Destinations, Tourism Cares, and The Travel Foundation.