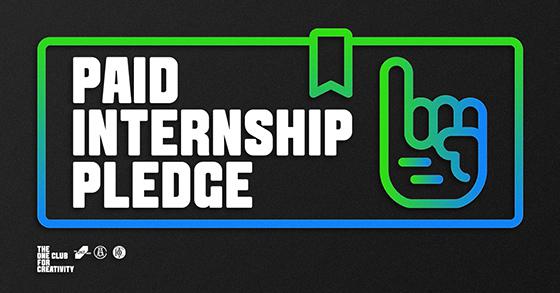 The One Club is issuing a call-to-action to agencies, brands and other groups hiring interns this summer to pay $15 per hour for their contributions.

The “Paid Internship Pledge” calls on agencies, studios, brands, ad schools and other industry organizations to commit to help to “level the career playing field for thousands of young people looking to break into the industry,” says Kevin Swanepoel, CEO, The One Club. These groups can “support our drive to provide more equitable opportunities for economically disadvantaged and diverse candidates.”

The initiative launches with a number of founding signees: Cartwright, Collins, The Community, Design Army, Edelman, FCB Worldwide, Goodby Silverstein & Partners, The Martin Agency, School of Visual Arts, R/GA, Sid Lee, Wieden+Kennedy, as well as The One Club itself.

Upon signing the form, agencies and brands can upload their logos to be displayed on the page on The One Club website and provide a link to paid internships they currently offer.

The initiative was strongly supported by the organization's Board of Directors, including FCB’s Susan Fowler Credle and 72andSunny’s Glenn Cole, who played an integral, hands-on role in crafting the pledge.

Internships are an important first step in a career, but too often are unpaid and not a realistic option for diverse students and other young creatives from disadvantaged backgrounds who need an income to help pay for college or life expenses.  The resulting experience gap is often impossible for them to overcome, they state.
advertising, agency
Next story loading