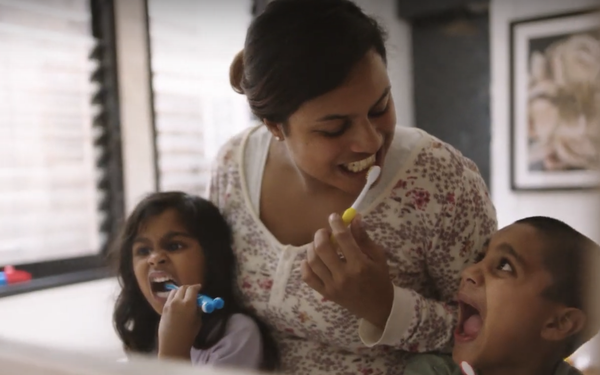 Every Mother’s Day, it seems, viewers can depend on touchy-feely commercials featuring moms with their kids doing their mom things -- like  caring, feeding, teaching and encouraging them -- while a tinkling piano provides the audio track.

At the end, viewers find out that Hallmark, Teleflora, Procter & Gamble and other marketers love your mom just as much as you do.

The Mother’s Day spot for Tylenol doesn’t look much different, but this Mother’s Day next Sunday is the first one since millions of moms everywhere were shut out of seeing their extended families for a long time, because of the pandemic. It's also the anniversary of moms’ overtime ordeal when, as the spot points out, moms did all those mom things, but with even less of a break than before.

So hearing a recitation of how, in the pandemic year, they had to be mothers and teachers and “fix boo-boos and fix dinner,” a viewer might say, “Gee, that’s every year, too, isn’t it?”

The commercial ends repeating Tylenol’s new current tagline, “Care without limits," which will get a fuller introduction in June.

That it’s a Mother’s Day message from a headache and pain relief medication seems like a sly joke about all those 24/7 joys of motherhood.

Marking this point in time, the commercial has some other attributes. It was filmed in a COVID-safe manner, as many other commercials have been in the last several months. But at a time when women in the film business are trying to get their due, 83% of the key crew' working on the commercial are women, and, Tylenol’s publicists say, 70% of them are also moms.

A separate, behind-the-scenes video was shot by the agency, Doner Advertising, to document that the ad was  “created by moms, written by moms, directed by moms and produced by moms.”

In that video, a few of the crew briefly tell their stories.  “I didn’t work for a full three months. I took them out of daycare,” says Celia, identified as the production manager for the shoot and the mother of twin boys and a daughter, 4 1/2. “It was hard, I’m not going to lie.” (She adds later, “I think being a mom is harder than being a production manager, to be honest.”)

For a while earlier in the trajectory of the pandemic, French medical officials, and the National Health Service in the United Kingdom, advised patients to stay away from ibuprofen, the active ingredient in Advil, and advised using acetaminophen, the ingredient in Tylenol, instead. Though the warning was quickly downplayed because it was based on “non-evidence based” information, for a short while there was a run on Tylenol products in the U.S.