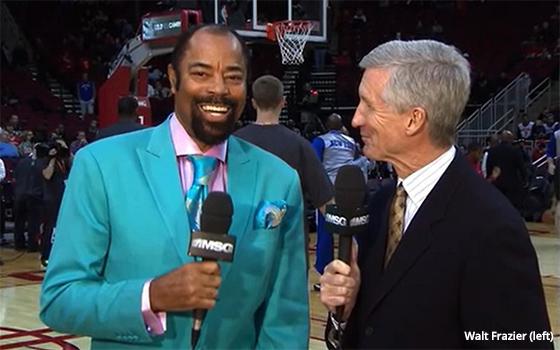 Living in the New York metro area has its good and bad points, but one of the good ones is the opportunity to see and hear a TV personality who just might be the best broadcaster in America.

He is Walt Frazier, also known as Clyde, the revered local NBA star and broadcaster who has provided his own unique color commentary during Knicks games on New York radio and television since 1987.

Clyde (above photo, left) is 76 now but seems ageless. He may not realize this, but he is one of the true treasures of New York City television today.

Time and time again in our home, when the lament is heard in the early evening that “there is not much on TV tonight,” the frequent antidote is live sports -- in particular, a New York Knicks game on MSG (Madison Square Garden) Network.

At the present time, learning there is a Knicks game on TV is especially good news because the team is on a hot streak and rising in the NBA Eastern Conference standings here in the final weeks of the current NBA season.

But even if they were not, televised Knick games are always worth savoring here because of the uniqueness of Clyde Frazier, whose descriptions of the play we are watching represent a kind of poetry that ranges from rare to nonexistent in broadcasting today. Also rare is his unique chemistry with play-by-play man Mike Breen (seen with Clyde in the above photo).

Frazier is famous for his rhymes. In his eyes, the players seen scoring on the court are “dupin’ and swoopin’,” “dishing and swishing,” “slamming and jamming,” profilin’ and stylin’,” “tantalizing and mesmerizing” and too many other rhyming combinations to remember or recount here.

The TV Blog knows of no other broadcaster in America who puts together words in the way Clyde Frazier does. However, his creativity would be meaningless if it wasn’t backed up by his prodigious knowledge of all things basketball.

When he isn’t rhyming, he is describing the way a player fooled an opposing defender by shooting with his left hand instead of his right, or he is noting that a defender’s block of an opponent’s shot is even more significant because of the height difference between the two.

Frazier, who is himself only 6'4," loves it when guys block shots of other guys who are much taller than they are. He seems to have the entire NBA’s height data either committed to memory or at his fingertips.

His voice is a pleasure to listen to when he is describing the players and the shots they are taking “from the baseline,” “in the paint,” “off the glass” or “behind the arc” (three-point range).

What elevates the quality of his voice is the fact that when you hear him speak, the sound of his voice reveals (or seems to reveal) that he is smiling broadly while describing the action.

This is something that broadcasting and public-speaking coaches once advised their clients to do to improve and enhance the tone of their voices.

That is why when the evening comes in New York City, and Clyde Frazier and Mike Breen are seen introducing another Knick game, why watch anything else?