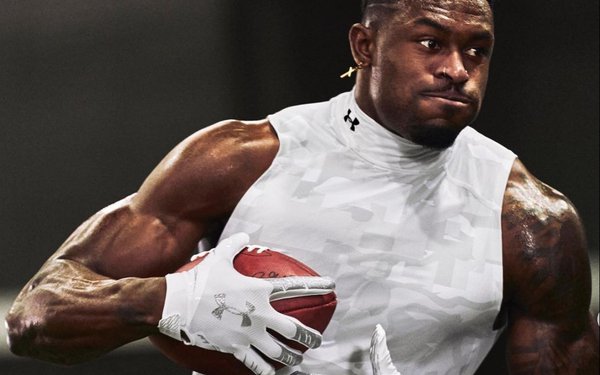 Under Armour's first-quarter results indicate the brand, which has seen its share of struggles, is getting back in the game. It just announced that first-quarter revenues rose 35% to $1.3 billion. And its CEO says it will invest more of those better-than-expected sales dollars back into marketing to further build its brand.

While much of the revenue gain is due to the pandemic pummeling the company took in the year-ago quarter, observers say it is an indication that the company is at least partially recovering some of its old mojo.

Because the results have been better than anticipated, "we are investing more into marketing," says Patrik Frisk, its CEO, in an interview with CNBC. "We feel confident about our ability to read and react to such a degree that we feel we can put money back into the top of the funnel."

Frisk says the increases indicate that its three-year transformation effort, positioning the brand as a way to improve athletic performance, is paying off. "The consumer is responding," he adds.

The revenue bounce of 35% was "well above our 19% estimate," writes David Swartz, who follows the company for Morningstar. "Sales were up about 4% as compared with 2019's first quarter, suggesting that demand has largely recovered from the effects of the pandemic."

Net income came in at $78 million, compared to a loss of $589.7 million in the last year's comparable period.

The company increased its prediction for the year ahead, now calling for a gain in the high teens, compared to its previously announced expectation of a high-single-digit percentage rate increase.

The entire category continues to be "a roller coaster ride," writes Matt Powell, vice president, senior industry advisor for sports at the NPD Group, in his quarterly analysis. "Sales of sports footwear grew more than 35% versus the same period for 2020 and in the high teens compared to 2019."

But Powell points out that many of the industry's gains are courtesy of one-off events, including the third stimulus check, an earlier Easter and a surge in vaccines. In footwear, "Under Armour sales were in line with the market compared to two years ago," he writes. But it underperformed in apparel sales.

Swartz sees the company as vulnerable. "We view Under Armour as lacking an economic moat, given its failure to build a competitive advantage over other athletic apparel firms," he writes.

"Between 2016 and 2020, Under Armour's North America revenue declined more than 26%, even as some rivals thrived during the pandemic. We think Under Armour has fallen behind on innovation, and its product is not sufficiently differentiated."

Neil Saunders, managing director of GlobalData, sees similar weaknesses. "We still believe that Under Armour has more rebuilding to do within North America. The company had a much choppier 2020 than many rivals, with revenue declining more sharply. Under Armour is a diffuse brand that needs more clarity and stronger points of differentiation so that it can build up better loyalty among consumers."