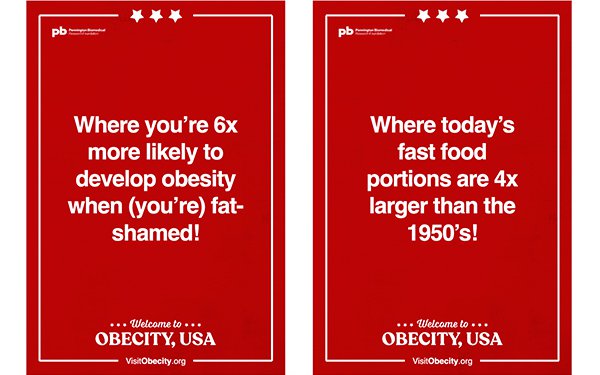 Dubbed “Obecity, USA” the effort plants a stake in the ground to stop obesity by 2040.

“The problem we were solving for is the public perception that obesity is the result of poor decision making,” says Nicolas Chidiac, brand camp strategy lead, Razorfish. “During our research, one consumer said to us, ‘If you get cancer, you’re a victim. If you’re obese, you’re a culprit.’”

With that and other insights Razorfish decided the strategic jumping-off point for the campaign was the simple line, “It’s not what you’re eating; it’s what you’re being ‘fed.’”

“Obecity, USA was the perfect metaphor to drive home the scale of the problem and environment people are surrounded by,” explains Chidiac.

The creative includes animated films introducing the characters living in this community with a specific focus on African-Americans and children, while billboards and posters present a faux tourism-like campaign that show statistics highlighting America’s obesity crisis.

Messaging drives viewers to VisitObecity.org to learn more about the campaign and to use the #GetFedUp hashtag on social media.

The integrated campaign spans radio, digital media and the OOH advertisements.
Part of LSU, Pennington Biomedical has been conducting basic, clinical, and population research on obesity, diabetes, cardiovascular disease, cancer, and dementia since its founding in 1988.