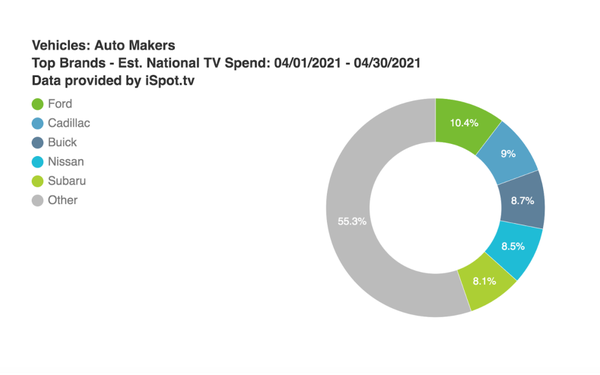 Automakers spent an estimated $238.6 million on TV in April 2021 -- an increase of 148% year over year, according to iSpot.tv. Many large advertisers pulled back on TV last April, especially with live sports completely absent due to the COVID-19 pandemic.

This year, sports made up six of the top 10 shows by spend for auto brands in April, and nearly 40% of all spend for the month (but about 19% of impressions).

Impressions were up 49% compared to last April, per iSpot.tv.

Tentpole events made up significant portions of automaker spend in April, per iSpot. Nearly 26% of the total on national TV came during the NCAA Men’s Basketball Tournament Final Four and title game, and another 11.5% was dedicated to the Oscars, while the 2021 Masters Tournament comprised 3.9%.

Over the last 90 days, “The New Nissan,” starring Brie Larson, has performed well, according to Ace Metrix Creative Assessment. The creative earned 7.5% greater attention than the norm for auto ads in the timeframe, and 7.3% more likeability.

Given the fact that last April, the country was going into the pandemic, and this April, we’re transitioning out, huge spend increases for many brands makes sense, says said Stu Schwartzapfel, senior vice president, media partnerships at iSpot.tv.

“Last April was a tumultuous time for most TV advertisers, as the climate around the pandemic demanded new creative, while a lack of tentpole programming left many prime-time and sports advertisers without their typical ad buys,” Schwartzapfel tells Marketing Daily. “A year later, we’re seeing much more optimism amid a perceived ‘return to normal,' and that’s created a lot of momentum for automakers to increase TV ad investments once again.”

Of the top 20 automakers by national TV ad spend, 17 increased spend by at least double-digit percentage points, with many jumping up by 100% or more.

Hyundai (down 7.7%), Lincoln (down 33.1%) and Toyota (down 39.5%) were the only brands out of the top 20 spenders to decrease compared to last April -- though this fact shows they kept spending last year when many others didn’t.