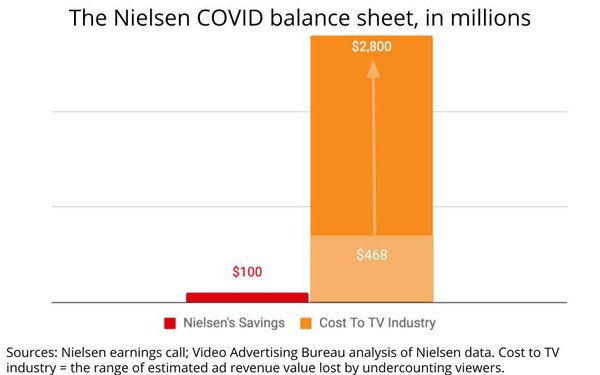 While the COVID-19 pandemic wreaked havoc on Nielsen’s ability to accurately measure U.S. TV households, it also created a unique benefit to its bottom line: $100 million in cost savings.

The disclosure, which was made during a recent earnings call with investors and Wall Street analysts, has caused some to revise their estimates for Nielsen’s financial results upward, and boosted the target price of its publicly traded stock.

The financial benefit is ironic, because the $100 million cost savings were attributed to “COVID temporary cost cuts made last year,” CFO Linda Zukauckas disclosed during the call.

“We were able to perform most of our field work remotely throughout the pandemic, but CDC and state guidelines prevented us from entering panelists' homes, either to sign up new panelists or maintain existing homes,” CEO David Kenny confirmed during the call.

Early this week, the Media Rating Council (MRC) issued an analysis estimating that as much as 6% of U.S. TV usage was underrepresented by Nielsen during the pandemic. The MRC said Nielsen did inform the council about the unusual steps at the time it made them, but added that they explicitly impacted the quality of its sample, noting:

“Because Nielsen’s ability to provide in-person service to its panel homes remained restricted throughout the remainder of 2020 and into 2021, the number of homes allowed to remain in the sample that had been flagged for potential metering or other problems, and that would have otherwise been withheld or removed under Nielsen’s normal rules, continued to grow over time.”

Nielsen also disclosed that its field force did not return to its U.S. sample households until March 2021.

How the advertising and media industry deal with the pandemic-related sample quality erosion remains to be seen. To date, the Video Advertising Bureau (VAB) has been leading the charge on that, putting pressure on Nielsen to address it in some way.

A VAB analysis of Nielsen data estimates the "theoretical cost" of Nielsen undercounting TV audiences during the pandemic could be as much as $2.8 billion to the U.S. TV industry.

But according to at least one Wall Street analyst, it’s not likely to be a financial one, although Nielsen saved $100 million during the pandemic.

“We expect that Nielsen’s contracts protect them from material financial impact, but this issue raised the impetus to bring panel maintenance up to speed ASAP. That began in March as teams began in-home visits and management noted that this was a one-time issue in nature,” BMO Capital Markets’ Daniel Salmon writes in a note sent to investors on Wednesday, adding: “Disruptions in measurement aren’t new (natural disasters like hurricanes have driven smaller short-term impacts), nor are large clients and users of the Nielsen’s ratings arguing for every member of their audience being counted (and rightfully so). So, we think this is an issue worth watching in the weeks ahead as Upfronts play out, but we also think it is manageable, too.”

In his note, Salmon said he has raised the target price of Nielsen stock from $30 to $33 per share. Nielsen shares currently trade for about $27.31, giving it a market cap of $9.79 billion. 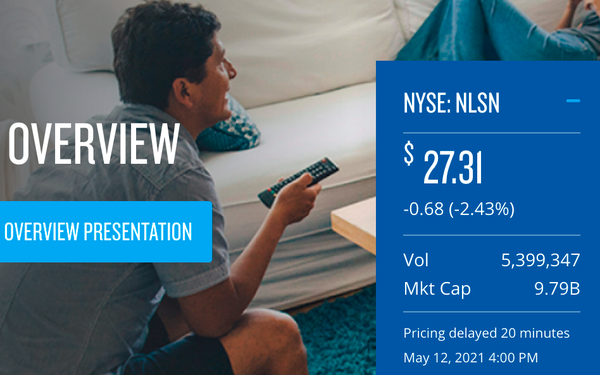