Frozen Dessert Makers Rev Up Marketing In Time For Summer 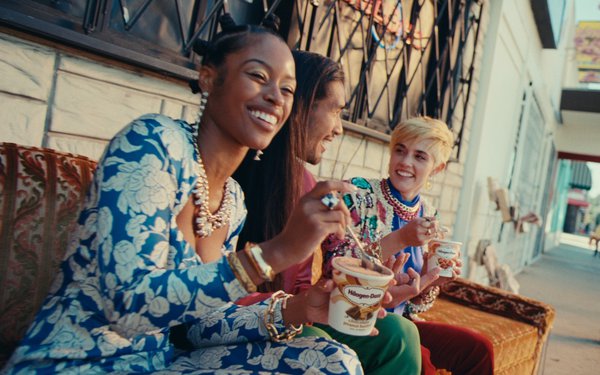 No surprise that Häagen-Dazs still wants to be associated with luxury—although the 61-year-old brand considers the term to be conditional.

Hence the new “That’s Daz” campaign tagline, whose goal is to have people reimagine what luxury means.

The concept is visualized in a spot titled “Luxury Is Where You Are” from the Cartwright agency.

Accompanied by the song "Beam Me Up" by Midnight Magic, young people are seen indulging in Häagen-Dazs on sidewalks, streets and in bodegas.

Long known as a low-calorie frozen dessert brand, Halo Top has been aligning itself with wellness in its both creative messaging and new products that include dairy-free and keto-diet-friendly iterations.

Last year, Halo Top debuted the “Stop Shoulding Yourself” campaign with a spot featuring a plus-size model who rejects such everyday pressures as “I ‘should’ lose weight,” “I ‘should’ work out more” and “I ‘should’ eat more salads.”

Saying no to “shoulds” continues in new spots from Deloitte Digital, including “Pool Day” for Halo Top’s new fruit pops. This time, a woman cavorts poolside while rejecting such “shoulds” as swimming laps—opting instead for a float—and snacking less.

Wellness has been front and center in the positioning of Yasso since the Greek-yogurt-based brand launched in 2009. Now it wants the world to know that wellness and treats dipped in chocolate aren’t mutually exclusive.

This comes across in new “Audaciously Delicious” spots from Nomadic Agency. Visuals explain how attributes like creaminess, crunchiness and chocolate can be enjoyed while ingesting 25% fewer calories than an unidentified, chocolate-coated bar brand.

Meanwhile, the Wildgood brand is the first plant-based ice cream and non-dairy frozen dessert made with extra virgin olive oil, which it sources from Greece.

“We believe Wildgood can be a real game changer—not just for those who are leading a dairy-free lifestyle ,but for anyone looking to change things up in a healthier and delicious way,” Wildgood founder Sotiris Tsichlopoulos said in a news release.

For its part, Bomb Pop is planting itself squarely in the world of tweens and teens with a new campaign that showcases their interests and passions—from basketball and dance to skateboarding and music.

More than a dozen commercials from Deloitte Digital under the banner “A Flavor For Every You” include six non-professional actors who shot the content on their own iPhones.