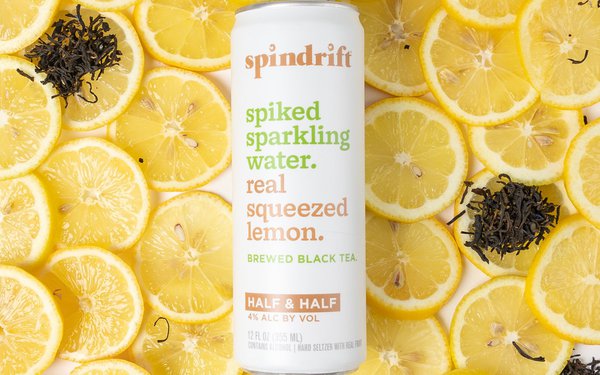 But there isn’t a crossover hit.

Now, Spindrift Sparkling Water, a seltzer brand that reportedly draws raves for its fruity flavors, has introduced Spindrift Spiked, with the same fruit-forward profile, and the new 4% alcohol-by-volume version is also getting raves in online reviews.

Its cans come with a graphic design that’s nothing like the original un-spiked version, and a tall, slender container that has become the customary type for the hard seltzer category.

What’s different is that nowadays, all the major brands call their product “hard seltzer,” not “spiked.”

With hundreds of competitors now crowding the aisles, why another one, even if the hard seltzer category has turned into a $4.5 billion business?

“Everybody and their mother has launched one,” admits Sue Kim, the company's vice president of strategy and marketing insights. She thinks Spindrift brings something else to the party. “Our ‘Drifters’ want this. They told us they’re not interested in typical hard seltzers,” the same thing consumers of the non-alcoholic version said about sparkling water before Spindrift arrived on the scene in 2010 and grew into a nearly cult favorite. It’s now available through Target stores, Whole Foods and Trader Joe’s, among other places.

According to BevNet.com, research firm IRI says it’s one of the fastest-growing brands in the seltzer space.

Unlike other major hard seltzers, Spindrift Spiked uses water and “only real ingredients and not synthetic flavors, sweeteners or additives,” it boasts. And Spiked lets drinkers know. The label for the pineapple version, for example reads, “spiked sparkling water” and “real squeezed pineapple” in big lettering, and below that, “Yup, that’s it.” (The same rejoinder is on its non-alcoholic version.) Spindrift Spiked comes in four flavors, all with between 7%-10% fruit, a high percentage in the business. The alcohol comes from cane sugar.

Spindrift Spike was the “all-around, unanimous crowd favorite” in a Washington Post taste test published a few days ago. “It won us over with its natural fruit flavors and un-cloying sweetness,” was the response from the tasting panel.

A reviewer for Business Insider said,  “I wouldn’t be surprised if this is the drink of summer 2021.”

If so, you might have to get on a plane. Officially, Spindrift Spiked is in Massachusetts, Rhode Island and Southern California, with the rest of the nation to come next year.

Some seltzer brands target drinkers in their mid-20s. Kim says, “We hope it appeals to a broad set of consumers but we think our core consumers will be older millennials, the 35-40 year old set, who aren’t drinking hard seltzer now and don’t [necessarily] want to.”

Spindrift Spiked is not quite the first seltzer to have an alcoholic and non-alcoholic version. Topo Chico Hard Seltzer, made and distributed by Molson Coors, came out in March, but its namesake Topo Chico Mineral Water, now owned by Coca-Cola, has been around for over 125 years.