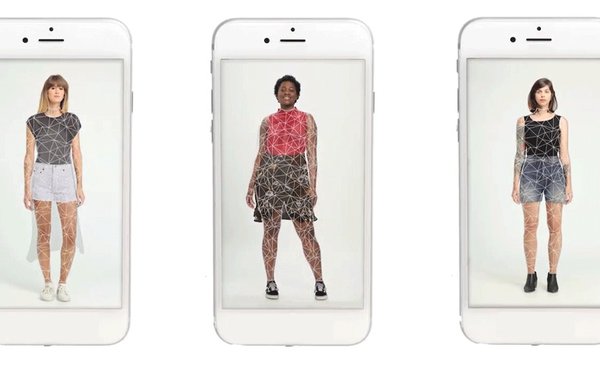 In its latest bid to elevate both its fashion and tech game, Walmart is buying Zeekit, a leader in virtual fitting-room technologies. The app-based approach lets users try dozens of outfits in minutes, and Zeekit says technology had reduced customer returns for other retailers by as much as 36%.

“Virtual try-on is a game-changer and solves what has historically been one of the most difficult things to replicate online: understanding fit and how an item will actually look on you,” writes Denise Incandela, Walmart’s executive vice president of apparel and private brands, in a blog post announcing the acquisition.

“In an increasingly online-driven category, customers not only want variety in styles, but also an inspiring and personalized digital experience that makes shopping for apparel easy, fun and social.”

Zeekit, based in Tel Aviv, has worked with retailers like Adidas, Macy’s and ASOS. Nike is also experimenting with the technology, including the Nike Virtual View.

Zeekit uses radar topography-mapping technology to help customers envision how clothing might look on them. And instead of just showing an item on one model, it offers a range of body types, right down to age and ethnicity.

It also includes a “Be Your Own Model” function for those who prefer to upload a photo of themselves.

The company was founded by CEO Yael Vizel, a former Israeli Air Force commander. She realized that the same technology that turned 2D photos into 3D graphics for military maps also worked on mapping the human body.

Zeekit says its data shows average order size increases by 18% when using the technology and generates a 43% increase in revenue per session.

Walmart’s acquisition also underscores its renewed interest in the fashion category, as well as its slipping dominance in apparel.

Earlier this year, a report from Wells Fargo said Amazon had surged past Walmart in apparel, taking over the No. 1 spot. Wells Fargo estimates that Amazon’s U.S. apparel and footwear sales soared by about 15% in 2020, surpassing $41 billion, as reported by CNBC. That puts it between 20% and 25% above Walmart.

And while Target’s total apparel sales are smaller, they represent some of that retailers’ crown jewels, including the lines Goodfellow & Co., JoyLab and Universal Thread.

Meanwhile, Walmart’s earlier bold forays into ecommerce and fashion have fizzled out. It spent $3.3 billion to acquire Jet.com, folding it into its other ecommerce holdings three years later. It acquired Modcloth and sold it two years later.

And it’s still hard to see where and how other acquisitions, including Bonobos, Moosejaw and its e-shop-within-a-website version of the now-defunct Lord & Taylor, are going.

Walmart says it believes it can scale Zeekit to create other fashion experiences, “including the ability to build the world’s largest virtual closet and mix and match clothing seamlessly.”

“With the team’s expertise in bringing real-time image technologies, computer vision and artificial intelligence to the world of fashion, we’ll identify even more ways to innovate for our customers," writes Walmart's Incandela.