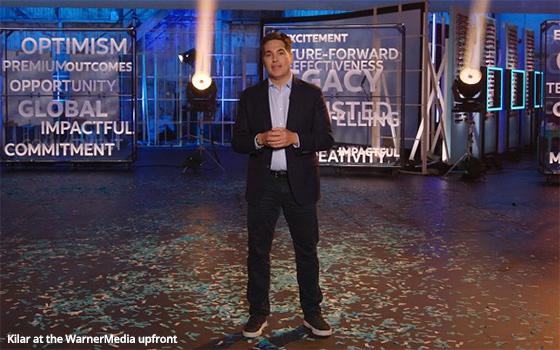 WarnerMedia CEO Jason Kilar played a leading role in WarnerMedia’s virtual upfront on Wednesday, but unlike Discovery Inc. President and CEO David Zaslav, Kilar is anything but this week’s TV Man of the Hour.

Zaslav led Discovery’s virtual upfront on Tuesday basking in the glow of this week’s blockbuster deal he made to bring all of the properties of WarnerMedia under his management.

The deal had apparently been in the works for a while, but seemed to be known only to a few. When Kilar found out about it is not known (at least to me). It does not seem as if he was in the loop.

In a lengthy feature story/profile on Kilar that appeared in The Wall Street Journal just last Saturday, there was no sign that neither Kilar nor the WSJ reporter who spent time with him on the Warner Bros. lot for an in-depth interview had any inkling that the news would break a day after the story would be published -- on Sunday -- that AT&T was shedding the entire division that reported to Kilar.

By Monday, in the wake of the official announcement of the WarnerMedia-Discovery deal that morning, The New York Times was reporting that Kilar had already “hired a legal team to negotiate his departure as chief executive of WarnerMedia.” The story cited two unnamed sources.

The profile/interview of Kilar in Saturday’s WSJ started on the front page of one of the paper’s inner sections (the one titled “Exchange”) and then took up an entire jump page further inside the section.

It was not until the lower half of the final leg of the story that any suggestion was made that AT&T might be having jitters about its future in the business of producing content -- specifically the cost of producing enough tonnage of content to be competitive with the other media-content giants.

“A concern among many WarnerMedia executives is whether AT&T has the stomach for the level of funding needed to keep generating fresh content for HBO Max over the next several years,” the story said. “They currently see a gap of more than $2 billion between what HBO Max has ordered and the production budget allocated by its parent in two years.”

Then, two paragraphs later, AT&T CEO John Stankey is portrayed as dismissive of the notion that AT&T is anything but satisfied with its WarnerMedia entertainment arm.

“In an interview, [John] Stankey, the AT&T CEO, waved off questions about his company’s commitment to the entertainment business, which he argued the telecom has demonstrated repeatedly,” the story said.

And yet, meanwhile -- as we know now -- Stankey was taking secret meetings with Zaslav at Zaslav’s Greenwich Village townhouse to make a deal for AT&T to unload WarnerMedia and wash its hands of the entertainment biz.

Cut to Wednesday morning (yesterday), and Kilar -- who two days earlier had already been reported to be seeking a way out of the company -- had to lead off WarnerMedia’s upfront with a statement about the Discovery deal, in much the same way that Zaslav did at the start of Discovery’s upfront on Tuesday.

“Ours is a rapidly evolving industry and we, of course, are transforming with it,” Kilar said. “In fact, today’s pre-recorded event follows important news made by both our company, AT&T, and Discovery on Monday. Together, we will form a new company super-serving our advertisers with a promise to unite WarnerMedia’s brands with Discovery’s brands all under one banner.” He then thanked advertisers for “their continued partnership.”

If his delivery of these lines sounded a little arched or stilted -- i.e., not exactly straight from the heart or otherwise sincere -- then that was understandable.